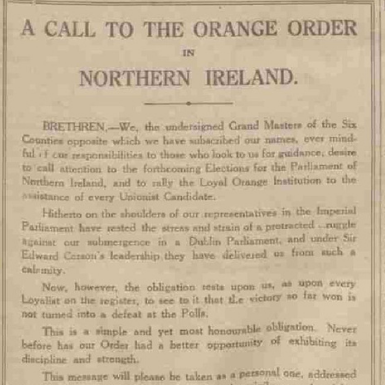 On 11 May 1921, several newspapers published a statement signed by the Orange Order Grand Masters across the six counties. It encouraged its members to support Unionist candidates in the upcoming Northern Ireland general election on 24 May. The signatories included James Craig, the Unionist leader who would go on to win that election, as Grand Master of the County Down Orange Lodge.

A Call to the Orange Order in Northern Ireland

BRETHREN,—We, the undersigned Grand Masters of the Six Counties opposite which we have subscribed our names, ever mindful of our responsibilities to those who look to use for guidance, desire to call attention to the forthcoming Elections for the Parliament of Northern Ireland and to rally the Loyal Orange Institution to the assistance of every Unionist Candidate.

Hitherto on the shoulders of our representatives in the Imperial Parliament have rested the stress and strain of a protracted struggle against our submergence in a Dublin Parliament, and under Sir Edward Carson’s leadership they have delivered us from such a calamity.

Now, however, the obligation rests upon us, as upon every Loyalist on the register, to see to it that the victory so far won is not turned into a defeat at the polls.

This is a simple and yet most honourable obligation. Never before has our Order had a better opportunity of exhibiting its discipline and strength.

This message will please be taken as a personal one, addressed to each member in his private capacity, urging vigilance and activity, and, besides the importance of recording his vote, the necessity of using every influence and persuasion upon friends and neighbours to play their patriotic part.

Our opponents have combined against us on the single issue of “No Partition.” Therefore, we on our part must, in the first instance, defeat that combination, and then rely upon our chosen representatives to carry on the best traditions of our race by legislating wisely for the benefit of the whole community.

Superimposed upon the foregoing considerations are loyalty to the Throne, Great Britain, and the Empire.

The situation demands a supreme effort. Unity and courage will win the day— let no man stand apart.

With hearty greetings to those who have placed us in a position which now enables us to issue this very earnest appeal, and in the firm belief that all to whom it is addressed will readily respond, we subscribe ourselves …