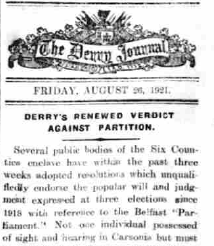 On 25 August 1921, at a special meeting of the Derry Corporation, Alderman Charles Bradley proposed a resolution declaring opposition to the Northern Ireland Parliament and refusing to accept its authority. The resolution was carried by 18 Sinn Fein and Nationalist votes to 15 Unionist votes. The following editorial, printed on the following day in the Derry Journal, outlines nationalist opposition to the partition of Ireland.

Several public bodies of the Six Counties enclave have within the past three weeks adopted resolutions which unqualifiedly endorse the popular will and judgement expressed at three elections since 1918 with reference to the Belfast “Parliament.” Not one individual possessed of sight and hearing in Carsonia but must be well aware in that way of widespread determination to oppose that “Parliament,” the authority of which can be exercised with respect to fully half a million of the population only by the ruthless application of coercion by the very men whom the British Government solemnly proclaim must never in any circumstances be themselves coerced. The Council of the extensive county of Tyrone is one of these bodies that during the present month have carried a resolution of the nature noted.

Yesterday the Derry Corporation maintained its position in true line with national feeling and social equity by approving of a resolution of similar import. The addresses of the Mayor and of other members of the Council who supported the motion make perfectly clear the falsehood of the suggestion that the resolution was brought forward to enkindle bitterness and promote strife in our midst. That is not the case. There is no such intention, but on the contrary, desire for preservations of citizen peace and harmony finds distinct expression in the speeches and in the terms of the resolution itself.

By the adoption of the resolution the Corporation are not only taking their stand in support of the priceless principle of the preservation of National Unity as an indispensable constituent of just government in Ireland, but they perform a service to their city in the practical sense of no slight value. Derry’s material interests have never had sympathetic consideration at Partition headquarters if it was felt they conflicted ever so slightly with those of Belfast. Sectarian intolerance is not the sole besetting sin of the latter city. Rampant commercial greed has helped to dig the pit into which it has fallen.

On the general question agencies at the beck and call of the “chief props” of Partition in Belfast are, we see, this week manifesting an angry mood of disgruntlement and discontent. Sourish symptoms have disclosed themselves also among “minor props” here and there along the Carsonian borders. Despite the truculent references to Sinn Fein, and notwithstanding such heroics as “hands off the Northern Parliament” and “no tampering with the Ulster Constitution,” it must be apparent to all who can read between the lines that the stalwarts of the Craigite camp are distinctly uneasy about future developments. If the full facts were known the position of some of the “leaders” is not one to be envied. But for their present troubles they have themselves solely to thank. They slavishly obeyed orders dictated by insensate prejudice and by brutal mob bigotry, and they are reaping the inevitable consequences.

The time is perhaps nearer than is generally believed when it will be demonstrated beyond possibility of doubt that neither Sinn Fein nor Nationalism ever brought a tithe of the disrepute of the heavy material loss to Belfast that are direct consequences of the stupid intolerance and reactionary policy which insists on “running that city as it were a municipal Orange Lodge.