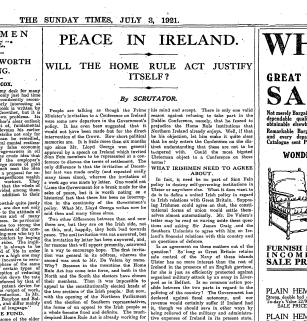 On 3 July, The Sunday Times ‘Scrutator’ reported on recent events in Ireland, arguing that the ‘much-despised’ Government of Ireland Act and the resulting elections provided an opportunity for peace talks to end the Irish War of Independence. On the following day, Sinn Féin leader Éamon de Valera met the four Unionists of the Southern Ireland parliament to discuss Prime Minister David Lloyd George’s invitation to attend peace talks in London.

People are talking as though the Prime Minister’s invitation to a Conference on Ireland were some new departure in the Government’s policy. It has even been suggested that it would not have been made for the direct intervention of the Crown. How short political memories are. It is little more than six months ago since Mr. Lloyd George won general approval by a speech on Ireland which invited Sinn Fein members to be represented at a conference to discuss the terms of settlement. The only difference is that the invitation of December last was made orally (and repeated orally many times since), whereas the invitation of a week ago was made by letter. One would not blame the Government for a break made for the sake of peace, but it is worth noting as a historical fact that there has been no interruption in the continuity of the Government’s policy. What Mr. Lloyd George writes now he said then and many times since.

Will the Home Rule Act Justify Itself?

Two other differences between then and now there are, but they are on the Irish side, not on this, and, happily, they both lead towards peace. The oral invitation was not answered, but the invitation by letter has been answered, and for reasons that will appear presently, answered in a way to encourage hope. The first invitation was general in its address, whereas the second was sent to Mr. De Valera by name. Why? Because in the meantime the Home Rule Act has come into force, and both in the North and the South the electors have chosen their members. Then it was impossible to appeal to the constitutionally elected heads of the two sections of the Irish people. But now, with the opening of the Northern Parliament and the election of Southern representatives, the forms of an appeal to the Irish people as a whole became fixed and definite. The much-despised Home Rule Act is already working for good…