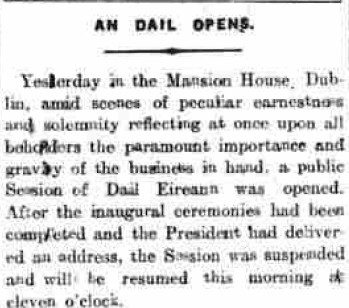 The second Dáil met on 16 August in Dublin’s Mansion House, its first meeting since the Irish elections in May. All the members took the oath to preserve the Irish Republic and rejected David Lloyd George’s offer of dominion status. On the following day, the Derry Journal reflected on de Valera’s opening address and hoped that the Dáil would ‘arrive at a decision adequate in wisdom to the needs of the fateful occasion’.

Yesterday in the Mansion House, Dublin, amid scenes of peculiar earnestness and solemnity reflecting at once upon all beholders the paramount importance and gravity of the business in hand, a public Session of Dail Eireann was opened. After the inaugural ceremonies had been completed and the President had delivered an address, the Session was suspended and will be resumed this morning at eleven o’clock.

It was indicated that the Nation’s reply to the proposals of the British Government would be discussed in private Session. Alluding to that the President, in his address to the Deputies, observed—“You all understand the seriousness of that reply. You all understand that it is intended by the British Government to make than an issue of peace of war with this nation. Hence it is that we have to discuss that matter first, in private. Later on, when the reply is sanctioned and ready for despatch, you will have here another public Session.”

Sufficient was added in the Presidential statement to enable one to judge that the conduct of negotiations so far with the Coalition Government was an extremely unsatisfactory task because the latter body were found recently—as upon countless former occasions—addicted to shifting their ground and avoiding the anchorage of settle principle. The impression left upon Mr. De Valera by the negotiations is evidently anything but reassuring. He avers that negotiations with Britain for the most part mean nothing. “All they mean,” he adds, “is an opportunity for saving faces. We do not negotiate to save faces. We negotiate to save bloodshed if we can. But we can negotiate on right and on principle.”

Other passages in the Presidential address convey an import no less grave. However, at this stage it would be inopportune and premature to embark upon further commentary. That the Dail fully recognises the momentous issues involved in the deliberations upon which they enter to-day, may be regarded as certain, and as we stated in last issue, the wish and prayer of the Nation is that they may arrive at a decision adequate in wisdom to the needs of the fateful occasion.