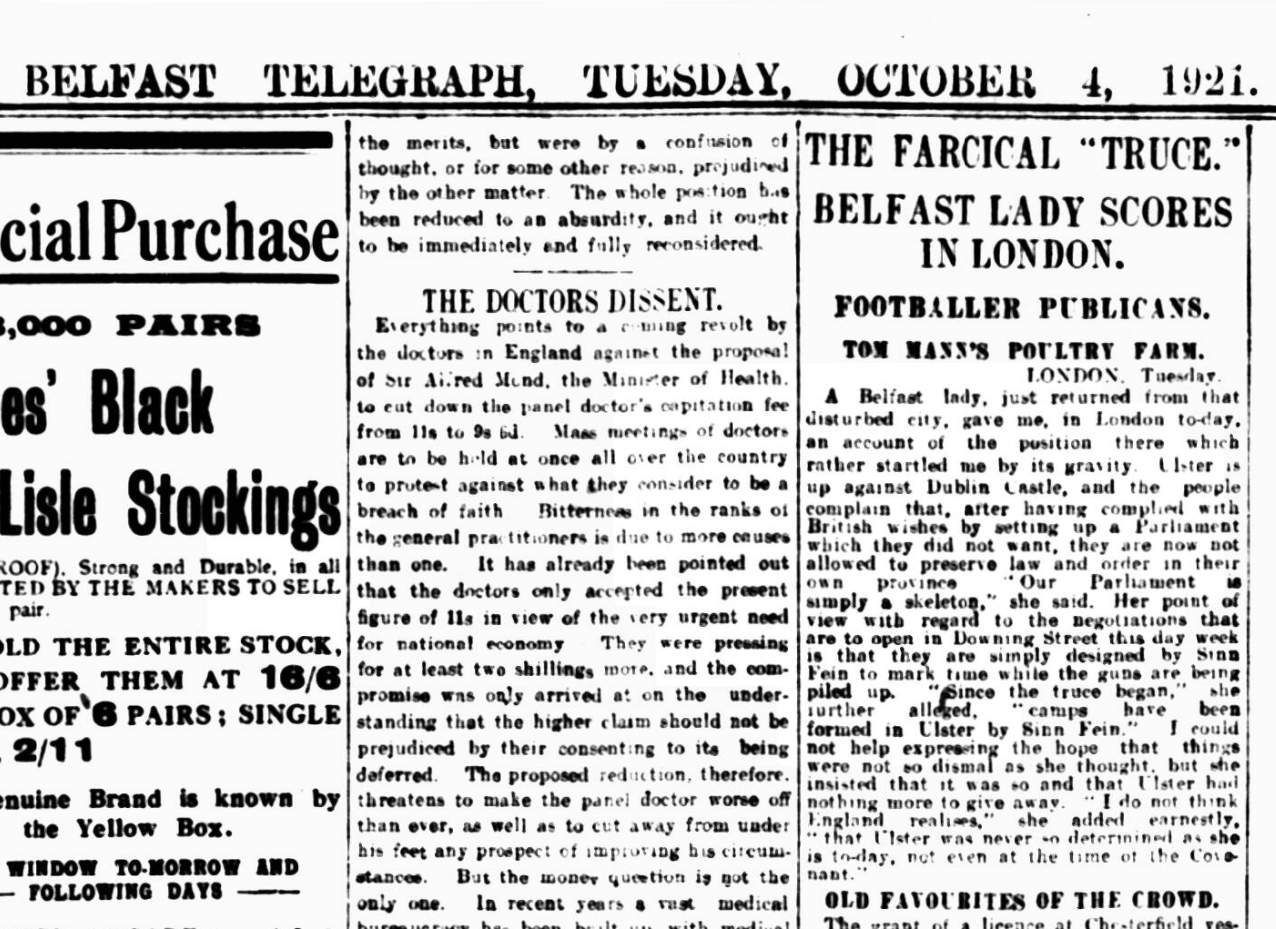 Many Irish and Northern Irish newspapers kept London correspondents. These often reported on reactions to Irish news in London, but on occasion were used to reassure their readers that people were looking out for their interests in the seat of British imperial power. This report from the Belfast Telegraph’s London correspondent recounts a conversation he had with a Belfast woman who had just arrived in London from her home city. She spoke of unionism’s unwillingness to compromise and echoed their shared concern that the republican movement was deceiving the British government – a perspective that the Belfast Telegraph’s unionist readership would likely identify with. Not wanting to leave all the London news to political pessimism, the reporter then moved on to the lighter topic of retired footballers managing local pubs.

A Belfast lady, just returned from that disturbed city, gave me, in London to-day, an account of the position there which rather startles me by its gravity. Ulster is up against Dublin Castle, and the people complain that, after having complied with British wishes by setting up a Parliament which they did not want, they are not allowed to preserve law and order in their own province. “Our Parliament is simply a skeleton,” she said. Her point of view with regard to the negotiations that are to open in Downing Street this day week is that they are simply designed by Sinn Fein to mark time while the guns are being piled up. “Since the truce began,” she further alleged, “camps have been formed in Ulster by Sinn Fein.” I could not help expressing the hope that things were not so dismal as she thought, but she insisted that it was so and that Ulster had nothing more to give away. “I do not think England realises,” she added earnestly, “that Ulster was never so determined as she is to-day, not even at the time of the Covenant.”

OLD FAVOURITES OF THE CROWD.

The grant of a licence at Chesterfield yesterday to an International goalkeeper serves to answer the question: “What becomes of professional footballers after their playing career is over?” The proportion who become publicans is in fact greater than that of any other choice of a calling. A player who has won public attention in the football field generally has a following in the public-house, for the local football crowd does not forget old favourites. Labour agitators, too, sometimes take to the public house business. Tom Mann used to have a “pub” in Long Acre, London. After he tired of it his friends collected a few hundreds and helped him to a poultry farm in the country. But he did not settle at that either. Agitation was in his blood.