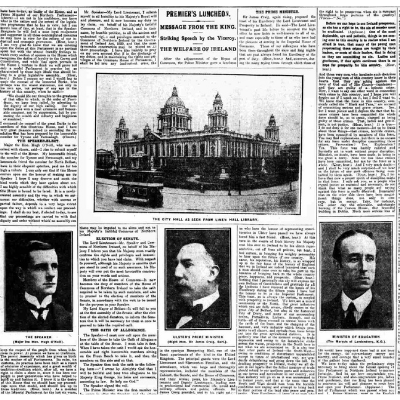 The Northern Ireland parliament, or more precisely its 40 Unionist MPs, met for the first time at Belfast City Hall. At this informal sitting before the official state opening 15 days later, members were sworn in (both the nationalist and Sinn Féin MPs did not attend) and Unionist leader Sir James Craig was confirmed as Northern Ireland’s first Prime Minister. Other cabinet appointments included Hugh McDowell Pollock as Minister of Finance, Richard Dawson Bates as Minister of Home Affairs, John Millers Andrews as Minister of Labour, Edward Mervyn Archdale as Minister of Commerce, and the Marquis of Londonderry as Minister of Education. Hugh O’Neill was appointed as Speaker of the House of Commons. The occasion was described by the Belfast News-Letter as a day ‘Belfast made history’. The Ulster Parliament was formally constituted yesterday, the proceedings taking place in the Council Chamber of the Belfast City Hall. The Lord Lieutenant (Viscount FitzAlan) presided while the proclamation convening the Parliament was read by the Clerk of the House, and the members then proceeded to the election of Speaker, to which office Major the Hon. Hugh O’Neill was appointed by a unanimous vote.

The members subsequently took the oath of allegiance, and after Mr T. Moles, M.P., had been duly elected to fill the position of Chairman of Ways and Means, the House adjourned until the 22nd inst.

Sir James Craig, the Prime Minister, entertained the members at luncheon, to which many representative public men from all parts of the Northern Parliamentary area had also been invited.

The gratifying announcement was made by the Premier that the Government had invited the King to perform the State opening of Parliament on the 22nd inst., and that his Majesty had graciously consented to visit Belfast for that purpose.

A very interesting speech was delivered by the Viceroy, who said that Ireland could not be prosperous so long as crime was rampant in large portions of the country.