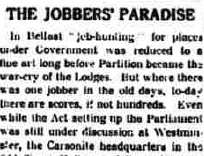 The Northern Ireland Civil Service came into being in 1921 with the establishment of seven government departments: the Prime Minister’s department and the Ministries of Agriculture, Commerce, Education, Finance, Home Affairs and Labour. It was staffed largely from employees who had worked previously for the Irish administration in Dublin Castle. The following editorial, published by the Freeman’s Journal in August 1921, questions hiring practices and reflects on the lack of employment opportunities in the new administration.

In Belfast “job-hunting” for places under Government was reduced to a fine art long before Partition became the war-cry of the Lodges. But where there was one jobber in the old days, to-day there are scores, if not hundreds. Even while the Act setting up the Parliament was still under discussion at Westminster, the Carsonite headquarters in the Old Town Hall was daily mobbed by applicants for every conceivable post, from that of Speaker to door-keeper. Though most of the fat things were grabbed long ago, the fight over the pickings goes on as furiously as ever.

One can measure the bitterness of the feelings aroused by reading between the lines of an official statement issued by the Northern Minister of Finance. Applicants are reminded that under the terms of the Act the Northern Parliament is bound to take over its proportion of civil servants from the existing Irish establishment. When these are all absorbed the Six-Counties Government will have comparatively few vacancies in its departments, especially if these are to be run in accordance with the economical principles of which so much was heard on election platforms. The allocation of these officials between North and South is held up for the time being by, the fact that the Civil Service Committee which is to be entrusted with performing the duty cannot meet until the “Southern” as well as the “Northern” Government has been constituted. Consequently nobody knows at present how many posts will be available, or whether candidates who are squabbling so fiercely have even have the chance of a bone.

Plainly something had to be done to slow down the rush of job-hunters, and to minimise, if possible, the resentment of those who arrive to find the cupboard bare, by transferring responsibility for the disappointment from the shoulders of Sir James Craig and his fellows to those of the framers of the Partition Act. But the Minister of Finance also deems it advisable to fling a sop to clamorous suitors. He gives them to understand that appointments to posts under the Six-County Parliament will have the same attraction that led Melbourne to value the Order of the Garter: “There’s no damned nonsense of merit about it.” Such vacancies as are available will be filled by a selection committee acting in accordance with the principles that have always governed nominations to places in the “Imperial Procvince.” “In due course,” it is added, “recruitment will be by open competitive examination.” But by that time there is likely to be little left worth competing for.