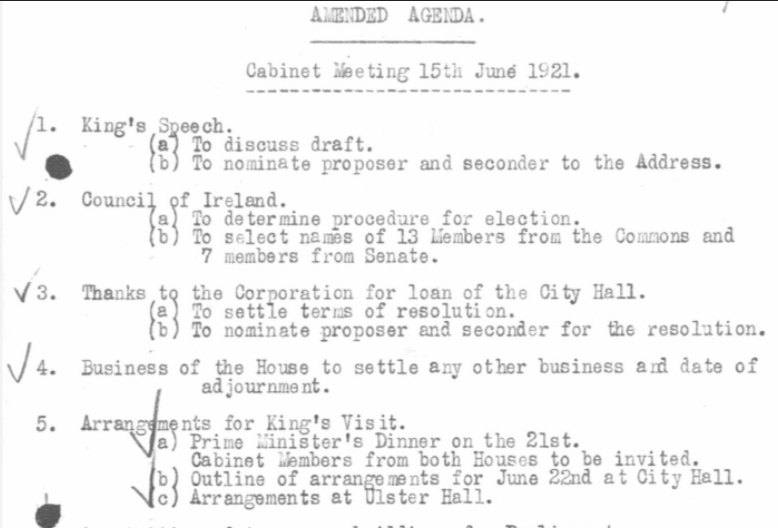 On 15 June 1921, the Northern Ireland Prime Minister James Craig met with three members of his Cabinet, Hugh Pollock, Richard Dawson Bates, and John Miller Andrews, to discuss plans for the following week’s official state opening of the Northern Ireland parliament. A draft of the King’s speech was approved, and ceremonial details (such as Craig’s insistence that MPs walk in ‘an orderly way’ between the House of Commons and the Senate) were agreed upon. Beyond the state opening, the Cabinet selected the thirteen MPs and seven senators who would represent the northern parliament in the proposed Council of Ireland. Potential permanent sites for the new parliament, ministerial salaries, and unemployment benefits were also discussed. A draft reply for His Majesty to the Addresses to be presented to him at the Ulster Hall was prepared and passed. This was handed to the Minister for Home Affairs (through Sir Ernest Clark) for transmission to England.

The draft of King’s Speech was approved.

It was decided that in the House of Commons, Major Shillington should propose and the Hon. H. Mulholland should second the Address to His Majesty; and that the names of the Duke of Abercorn and the Right Hon. Samuel Cunningham should be suggested to the Leader of the Senate for proposing and seconding the Address in that House.

The Secretary was instructed to get in touch with Mr Dasent and ascertain whether the election of the Council of Ireland should precede or follow the moving of the Address.

The Prime Minister stated that he considered that it would be advisable to defer fixing Ministerial salaries until the time came when a Government was established in the South of Ireland, either by members elected at the last Election or by the Government exercising emergency powers, and that it would be advisable to make the salaries of the Northern Parliament conform with those to be adopted in the South. Possibly a special Committee of the Northern Parliament should be appointed to deal with this matter.

The Prime Minister notified that he would be giving a Dinner on the 21st to which all members of the Government in both Houses and the proposer and seconder of the Address in both Houses would be invited.

The Prime Minister instructed the Secretary to communicate with the Chief Whip that Members proceeding from the Commons to the Senate should “march in fours”.

The Prime Minister gave an outline of the arrangements for June 22nd, and the Secretary was instructed to arrange with Sir Ernest Clark for the conveyance of Ministers from the City Hall to the Ulster Hall in motors by the “procession route”.

The Secretary was instructed to ascertain from Ulster King of Arms the order of the Procession in the Ulster Hall.

The Prime Minister indicates that Huts would probably be used as temporary accommodation for the new Parliament, and that he had taken steps to have suitable huts at Gretna earmarked for this purpose.

The Minister of Labour stated that he had observed from the papers that Dr Macnamara, the Imperial Minister of Labour, proposed that out-of-work donations would be continued for a further period of 6 weeks. He was instructed to reply to all Labour organisations which approached him notifying them of this fact and making it clear that some months must elapse before the Government of Northern Ireland would be in a position to take action in such matters. 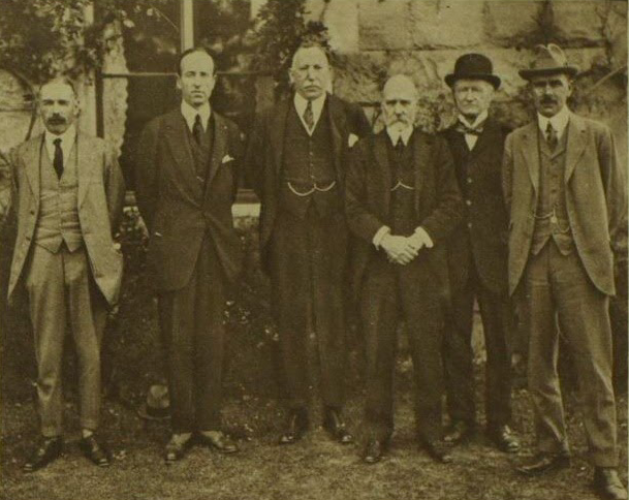