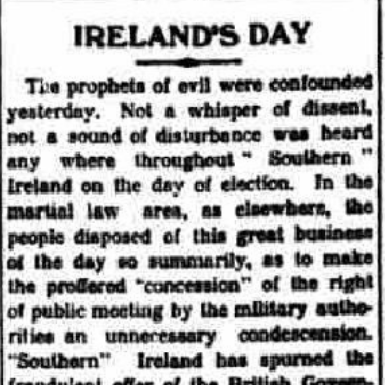 The prophets of evil were confounded yesterday. Not a whisper of dissent, not a sound of disturbance was heard any where throughout “Southern” Ireland on the day of election. In the martial law area, as elsewhere, the people disposed of this great business of the day so summarily, as to make the proffered “concession” of the right of public meeting by the military authorities an unnecessary condescension.

“Southern” Ireland has spurned the fraudulent offer of the British Government. The country cannot be bullied and will not be fooled by the architects of Partition and anarchy. Outside Trinity College, where four candidates were found who were willing to work the Partition Act, not one man or women in “Southern” Ireland would as much stir a finger to help George and Greenwood out of the morass into which they have jumped.

The voice of Ireland has been raised against the rule of force and chicane, and it will be heard the world over. All the arts of the Welsh wizard will avail him nothing in trying to explain away the verdict of the Irish people. By his frantic efforts to stifle the expression of the popular will, Mr. Lloyd George has brought England’s name into contempt. An individual who has lately published a book the evident object of justifying Mr. George’s actions towards certain military commanders during the late war, said, as in sorrow, that the British Premier employed “oblique and subterranean methods and had an inveterate taste for low and unscrupulous men.” We in Ireland have had too much experience of Mr. George’s methods and of the sort of agents he employs to carry them out. Neither the methods nor the men have succeeded in doing his work to his satisfaction. Ireland stands where did.

The 26 counties have spoken. The partitioned area has yet to be polled. Nothing is being left undone by the Government and their agents to confuse the issue in the north and to prevent a free expression of opinion by the minority. Nevertheless, the fight against Partition is being waged with spirit, and the protest against the dismemberment of the country will be memorable. The voice of “Southern” Ireland will have no feeble echo in the Six Counties.