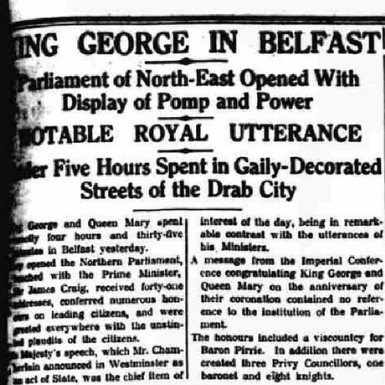 Headlines in the Freeman's Journal about the royal visit.

On 22 June 1921 King George V officially opened Northern Ireland’s new parliament at Belfast City Hall, where in a carefully worded speech he called for peace and reconciliation across all of Ireland. Newspaper editorials the day after gave a variety of responses to the Royal visit, from the effusive praise of the Unionist press and The Times to a more critical reaction in the Freeman’s Journal.

King George’s speech at Belfast was one that invites hope among those who are longing for an honourable Irish peace.

His Majesty admits that his vision with regard to Ireland has been clouded in the past.

The sentiments that he expresses, and the appeal that he makes, prove that he is emerging from the fog.

They will commend themselves to the Irish people.

The Irish people have always had “a hand for the grasp of friendship,” even where they have had much to forget and a great deal to forgive.

But forbearance cannot be one-sided.

King George’s Ministers and those who act in his name must begin.

There is no forbearance in the hangings, shootings, burnings, savage sentences, and imprisonments without trial, raids and forced marches, that make up the whole content of Ministerial policy in Ireland to-day.

If the seed that King George would scatter is to take root and ripen to a harvest there must be a truce to all these things.

A truce is called for by the King.

This is essential in order that his appeal should be listened to, and a fair field be given to the peacemakers to realise those desires of the King which are equally the desires of the Irish nation.

The great historic occasion, the inauguration by the King of the Northern Ireland Parliament, must long remain associated with the most pleasant memories both for his Majesty and the Queen …

Yesterday’s great demonstration of loyalty, we are glad to say, was unmarred by any untoward incident. Undeterred by the intimidation sought to be exercised — did not a Roman Catholic Bishop impudently declare that his Majesty’s coming was “a great mistake”! — the King resolved, as he said, to “come in person as the head of the Empire to inaugurate this Parliament on Irish soil.” His Majesty’s decision was justified by the brilliant successes with which the proceedings of the day passed off. He came, he received a remarkable expression of the feelings of devotion of the community amongst whom he found himself, and who in turn represented a larger community, and his visit is accepted as proof of his interest in what the Imperial Prime Minister describes in his telegram to Sir James Craig as “the great experiment.” …

Our Royal visitors were yesterday the central figures in what the King, in the first speech from the throne to an Ulster Parliament, most appropriately described as “a profoundly moving occasion.” No one, whatever his views may be as to how the relations between Ireland and Great Britain should be adjusted, can deny its epoch-making character. He must have been poor in his imagination indeed, and devoid of the historic sense, who did not understand, as he watched the stately pageant sweep the streets of Belfast, that he was a witness of one of those events after which many things long familiar can never be quite the same again. “They will be worse,” say some. “They shall be better,” say others: “we intend to make them so.” The Ulster people are looking forward to their future under self-government in the spirit of the latter pronouncement…

As we hoped, the Royal visit to Belfast has been a supreme and unqualified success. The day passed in the happiest circumstances, while enthusiasm of the populace knew no bounds. The honour of having the King and Queen in their midst, together with a vivid appreciation of all that it implied, has left an impression upon the receptive yet retentive minds of the Belfast people which a generation will not efface. In their eyes those new institutions of Government which the Sovereign came to inaugurate in person will henceforth be indissolubly associated with the tradition of loyalty in which Belfast glories. It was the confirmation of a new spirit in the public life of Northern Ireland …

Headlines in the Freeman's Journal about the royal visit.