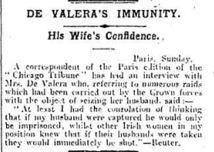 The Irish War of Independence saw shocking incidents of individual violence, often followed by brutal reprisals from both IRA and British state forces. One more than one occasion, members of the RIC and the Black and Tans took part in murders of suspected IRA men which were not properly investigated afterwards. In this passage, Éamon de Valera’s wife reflects upon one of the unexpected benefits of her husband’s fame: immunity from extrajudicial murder.

A correspondent of the Paris edition of the “Chicago Tribune” has had an interview with Mrs. De Valera who, referring to numerous raids which had been carried out by the Crown forces with the object of seizing her husband, said:- “At least I had the consolation of thinking that if my husband were captured he would only be imprisoned, whilst other Irish women in my position knew that if their husbands were taken they would immediately be shot.” – Reuters