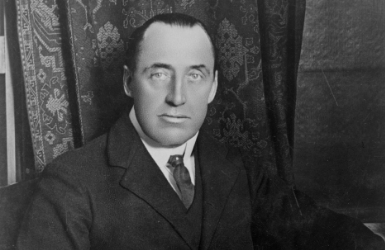 Sir Edward Carson in the early 1900s. © Library of Congress, via Wikimedia Commons.

The resignation of Andrew Bonar Law as Chancellor in Lloyd George’s coalition government in March 1921 was taken by many as a sign of the growing crisis within the Conservative and Unionist Party. Bonar Law had been one of the staunchest opponents of Home Rule, and though his resignation was primarily due to ill health, many took it as a protest against the Government of Ireland Act, which granted Home Rule for the six counties. Bonar Law resigned as leader of the Conservative Party on 21 March 1921, but even before then rumours swirled over who would succeed him as leader. The Irish Independent gathered several reports from different newspapers speculating on the reasons for Bonar Law’s departure, and the crisis over ‘the Irish problem’ that the new leader would inevitably face.

While it is believed in Tory circles that Mr Chamberlain, with the support of Sir E Carson and Sir R Horne, will be unanimously elected leader of the Party in succession to Mr Bonar Law, the Star’s political correspondent says the choice of Monday’s meeting will probably be between Mr Chamberlain and Sir Edward Carson.

… The Times remarks that ‘The Irish problem in particular of which he has ever taken a provincial, not to say sectarian, as distinguished from an Imperial view, has certainly added to Mr Law’s mental distress. The orthodox Unionist standpoint which he upheld, and upon which the policy of the Unionist Party has been based for more than a generation, is now so undermined by the Government of Ireland Act that the question arises whether ‘Unionism’ can truly be said to exist. Conservatism of the old sort, Mr Law could not represent.’

While, the Morning Post points out, the Coalition is predominantly Unionist, ‘the Union, which was the cornerstone of Unionist policy, is abandoned, and we are at a loss to say what the country has gained thereby except strife, hatred and wickedness.’

Sir Edward Carson in the early 1900s. © Library of Congress, via Wikimedia Commons.