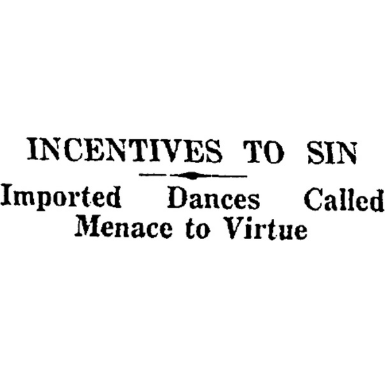 The 1920s saw the birth of the dance hall, giving young people new opportunities to meet and socialise on a regular basis. Often the place where couples would meet, dance halls caused frequent moral panics and outrages in society. Fears about the corrupting influence of dance halls were so strong that Cardinal Logue, Primate of all Ireland, preached a Lenten sermon on this subject in March 1921. The cardinal singled out especially the rise of ‘foreign’ dance styles that he feared would lead to permissive behaviour.

The dangers that lurk in dance halls are the subject of pointed references by members of the Hierarchy in their Lenten Pastorals.

Particular attention is directed to foreign dances, some of which are held to be grossly immoral. One prelate uses the term, ‘simply revolting’, in his reference to these importations.

‘Latterly there seems to be a regular mania for dancing’, comments his Eminence Cardinal Logue in his Pastoral:

Collections are made and halls built everywhere through the country. In towns these halls are useful. It is well that those who are engaged through the working hours of the day should have some place in which to meet for innocent recreation; there are billiard rooms, where relaxation may be sought in lawful games, provided gambling is excluded – these provide useful and rational recreation. An occasional lecture, concert or play within safe limits and proper control will contribute to culture.

Usually these halls are managed by committees of trustworthy persons, who will take care that they are not put to any unlawful or dangerous use. But in the country, where, owing to the scattered population, halls cannot serve any of the aforesaid purposes, they are mainly or exclusively used as dance houses, where young people assemble, till late hours, oftener during the whole night, with no one responsible for order, to indulge in dancing.

The clergy knows this from sad experience. They have often appealed to me to condemn those places, which were demoralising their parishioners.

I have no objection to dancing as such, provided the dances be clean, like most of our old Irish dances, indulged in within reasonable hours, with some responsible person in charge to keep order and see that young people, especially young girls, shall come and go under safe guardianship. Young people must have a reasonable opportunity for innocent amusement.

As to the character of the dances I know nothing, especially those imported dances, except some of the names which I see in the newspapers, and certainly those names are bizarre enough. Those who do know them tell me they are most objectionable on the score of morality. They seem to be outcrop of the of the corruption of the age.

And still I am told they are quite common in the halls and dance houses to which I have referred. This gives grounds for serious thoughts for parents, and those who are charged with care of the young. If they permit their boys and girls to be exposed to this corrupting influence, to frequent those dangerous places, to be out late at night, or all night, to go and return without proper guardianship, Almighty God will hold them responsible for the consequences.