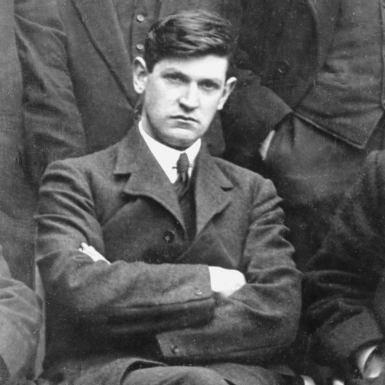 On 21 May 1921, the Freeman’s Journal published Michael Collins’ election address to the voters of Armagh for the upcoming Northern parliament. Collins was elected as an MP for Armagh on the first count and as a Sinn Féin candidate refused to take his seat, claiming the election as a contest for the second Dáil Éireann. Collins’ seat in the Northern Ireland Parliament remained vacant from his death in August 1922 up until the 1925 general election.

To the Electors of Armagh:

You will be asked on the 24th May next to select representatives to what the English term the Parliament of Northern Ireland. Your political spokesman have honoured me by putting forward my name as one of the Republican candidates for Armagh. On occasions like this it is usual for candidates to make many references to their past deeds, and to the past records of their party. They then make many promises of benefits to come. There is no intention on my part to do either one or the other of these things. In common with all other Republican candidates in this election, I go forward, not as an individual seeking any distinction, but as the exponent of a national principle.

We go forward not accepting the Partition of Ireland Act, but rejecting it. We stand, not agreement with that Act, but in protest against it. We ask our friends to vote for us on the ground that Ireland is one and indivisible, and that she is not to be torn asunder by any Act of an English assembly. We stand, further, to re-assert the principle fought for in 1916, confirmed by the votes of all Ireland in 1918, and being fought for at the present moment throughout the length and breadth of Ireland. Let your re-assertion be clear and emphatic. Every man and every woman who had pride in Ireland’s past struggle, and who has hope for Ireland’s future, will give his and her vote on the 24th to the Republican nominees.

Ireland free as a Sovereign entity or Ireland divided, with a minority of her population petted and pampered by the English, holding for the English a little corner of Irish soil as a bridgehead for interference with our liberty and aggression against our freedom – these are the alternatives to-day. Against the privileges of the few, against the partition of our country, against political and religious intolerance the majority of the people of Ireland stand in splendid unanimity, and our supporters in the six North-Eastern counties are the spearhead of the fight against these evils. The stronger and the straighter your answer, the nearer will be the end.

Within a free Ireland we stand for the fullest civil and religious freedom, and, notwithstanding the sufferings of our friends at the hands of bigotry and sectarianism, we must not allow ourselves to retaliate – we must not depart in the least degree from our fixed convictions on the rights and duties of the individual. Ireland has room for all her people.