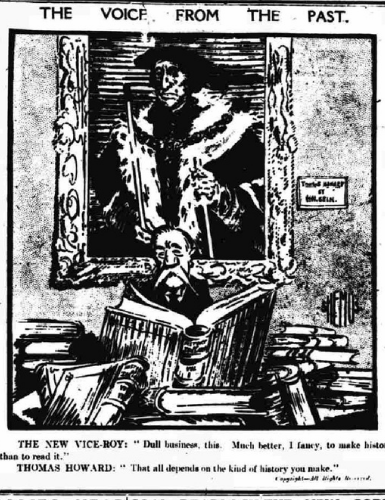 Satirical cartoon in the Freeman's Journal on the new Lord Lieutenant of Ireland.

In April 1921 Lord Edmund Talbot was appointed by the British government as Lord Lieutenant, or Viceroy, of Ireland. Much was made of the fact that Talbot was Catholic – the first to hold the office since the 17th century. Yet many in the Nationalist community viewed Talbot’s appointment as a hollow gesture by the British government. It did little to convince Nationalists to embrace the new Home Rule state of ‘Southern Ireland’, who continued to pursue full independence as the only acceptable option. This article from the Freeman’s Journal suggested that Talbot’s religion was less significant than his planned policies towards Ireland.

The Irish public will learn from the newspapers this morning that ‘the first Catholic Lord Lieutenant of Ireland since Tyrconnell’ was sworn in yesterday at Dublin Castle.

Lord French slipped away on Saturday morning, and Lord Fitzalan, as he is to be known, slipped in yesterday morning.

As became a Government in mourning and under sentence, all the old parade has been shorn from these comings and goings of the Chief of the English Executive in Ireland.

‘See the Conquering Hero’ has given place to ‘I’m Forever Blowing Bubbles,’ which is candid, or ‘Let Erin Remember,’ which is ironic, if not too salutary.

Ireland has long passed the stage when its mind or its mood could be influenced by a change of men that involved no change of measures.

Not even the fact that its coercionists may go to Mass and abstain on Friday can affect its mentality.

It still remains the crowning achievement of the English Coercion Code through all the ages.

The Irish People are, therefore, asking not about Lord Fitzalan’s religion, but whether there is to be a new orientation of English policy.

If one were to trust rumour then hope would be swollen to bursting; if one is to trust the public statements of the authors of the Partition and Plunder Act there is to be no change …

Satirical cartoon in the Freeman's Journal on the new Lord Lieutenant of Ireland.