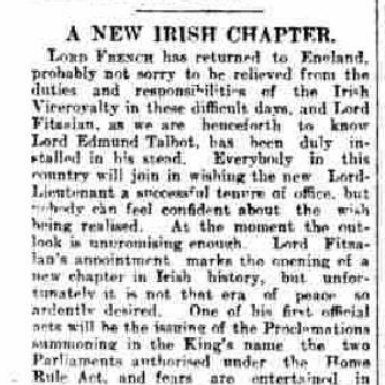 In April 1921 Lord Edmund Talbot was appointed as Lord Lieutenant of Ireland. Sworn in as the Government of Ireland Act came into force in May, his role was far from straightforward. As the Lancashire Evening Post commented, the outlook was ‘unpromising’. Talbot had to contend with ongoing conflict across the island of Ireland, and the fact that the vast majority of people in what was now ‘Southern Ireland’ did not recognise the new Home Rule state.

Lord French has returned to England, probably not sorry to be relieved from the duties and responsibilities of the Irish Viceroyalty in these difficult days, and Lord Fitzalan, as we are henceforth to know Lord Edmund Talbut, has been duly installed in his stead. Everybody in this country will join in wishing the new Lord-Lieutenant a successful tenure of office, but nobody can feel confident about the wish being realised.

At the moment the outlook is unpromising enough. Lord Fitzalan’s appointment marks the opening of a new chapter in Irish history, but unfortunately it is not that era of peace so ardently desired. One of his first official acts will be the issuing of the Proclamations summoning in the King’s name the two Parliaments authorised under the Home Rule Act, and fears are entertained in Ireland not without warrant, that far from betokening the end of strife this development merely means fresh troubles and perplexities.

In the northern Parliamentary area, the six north-eastern counties where Carsonism hopes to retain its influence, the electoral contests will be fought out with semblance of order, though in an unhealthy atmosphere, and with little prospect of securing an effective Parliament seeing that the Sinn Féiners and the Nationalists are mutually pledged to refrain from taking any part in the deliberations of the assembly no matter how many seats they may obtain. How is a legislature thus handicapped from the beginning to carry on its work efficiently or satisfactorily?

In the rest of Ireland, despite Ministerial assurances that ‘all possible facilities’ will be afforded so as to ensure a free and independent expression of opinion – which is certainly more than the Irish administration permits at present to representatives of the Press in Ireland – the elections are bound to prove a fiasco. The Southern Parliament will not come into existence, and, according to the plans providing for such a constituency, all Ireland, save the six-counties area, will pass under Crown-colony government. In all this there is no hope of peace: on the contrary, there is real danger of peace being made more difficult of attainment.