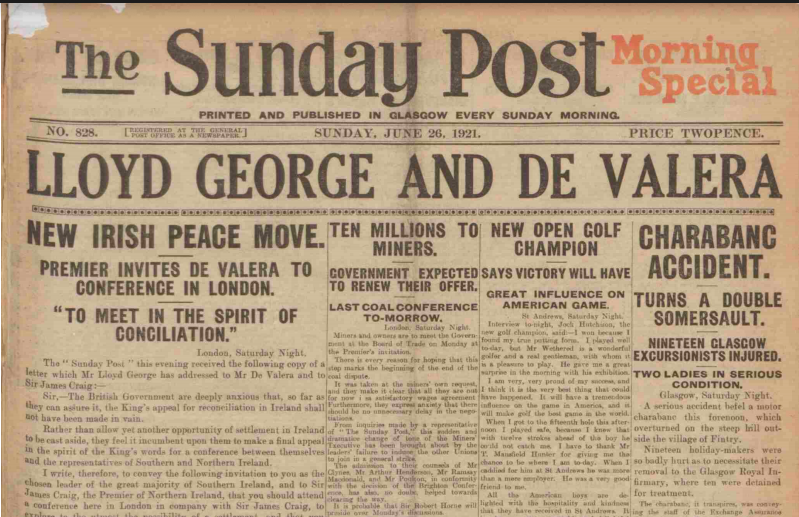 The British Government hoped that King George V’s conciliatory speech in Belfast would pave the way for political negotiations with Sinn Féin. On 26 June The Sunday Post was one of several newspaper that printed a letter from UK Prime Minister David Lloyd George to Sinn Fein leader Éamonn de Valera, inviting him to attend a conference in London. On 8 July, De Valera finally accepted an invitation to meet Lloyd George and a day later a truce was signed between the IRA and Crown Forces, coming into effect on 11 July.

Sir,—The British Government are deeply anxious that, so far as they can assure it, the King’s appeal for reconciliation in Ireland shall not have been made in vain.

Rather than allow yet another opportunity of settlement in Ireland to be cast aside, they feel it incumbent on them to make a final appeal in the spirit of the King’s words for a conference between themselves and the representatives of Southern and Northern Ireland.

I write, there, to convey the following invitation to you as the chosen leader of the great majority of Southern Ireland, and to Sir James Craig, the Premier of Northern Ireland that you should attend a conference here in London in company with Sir James Craig, to explore to the utmost the possibility of a settlement, and that you should bring with you for the purpose any colleague whom you may select.

The Government will, of course, give a safe conduct to all who may be chosen to participate in the conference.

We make this invitation with a fervent desire to end the ruinous conflict which has for centuries divided Ireland and embittered the relations of the peoples of these two islands, who ought to live in neighbourly harmony with each other, and whose co-operation would mean so much, not only to the Empire, but to humanity.

We wish that no endeavour should be lacking on our part to realise the King’s prayer, and we ask you to meet us, as we will meet you, in the spirit of conciliation for which His Majesty appealed.

I am, sir, your obedient servant,