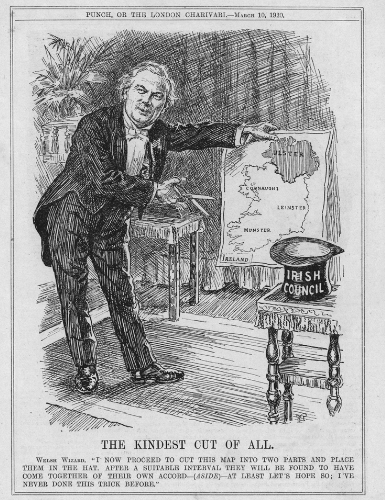 The Government of Ireland Act was passed in December 1920, but Prime Minister David Lloyd George continued to face significant opposition to its provisions. In an intense debate in the House of Commons, reported in the Freeman’s Journal, Lloyd George was asked to postpone the act taking effect by Southern Unionists, who argued that partition would increase the civil strife on the island. This was followed by a heated exchange with the Nationalist MP for West Belfast, Joe Devlin, about postponing the creation of the Northern Ireland parliament. Devlin demanded a referendum in the six counties, arguing that it would show that partition was being enacted against majority wishes.

Mr Lloyd George undertook personally yesterday the answering of questions on ‘peace’ and ‘conciliation’ in Ireland.

Lord Henry Cavendish-Bentinck asked the Premier whether his attention had been called to a resolution passed at a meeting of the Southern Unionists in Dublin last Friday declaring that any attempt to enforce the Government of Ireland Act would accentuate the present trouble in Ireland and make settlement more difficult, and whether, in view of the fact that there was no body of opinion in the South of Ireland supporting the Act, he would make an effort to reach a new basis of settlement.

Mr Lloyd George said he had received a communication urging the postponement, in the interests of peace and conciliation, of the ‘appointed day’ for the South of Ireland. The Government would give due weight to the appeal, as their sole desire was to establish freedom and good government in the whole of Ireland.

Where Minority is Ignored

Mr Devlin – In the interests of the same forces in Ireland, will he hold back the announcement of the ‘appointed day’ for the Ulster Parliament?

Mr Devlin asked whether the Premier was aware that at any moment he could have a memorial signed by 400,000 of the population of the six counties protesting violently against this Act being put into operation, and did he think that it could bring about peace and good order and the success of any Government in Ulster to proceed with the creation of 300 military block-houses around the six counties.

Bowing to the ‘Majority’

Mr Lloyd George – The majority of the people of Ulster are undoubtedly in favour of the experiment being made at the earliest possible moment, and when we are convinced that the majority in the South of Ireland take the same view then, of course, we shall certainly take the necessary steps in the matter.

Mr Devlin – Will you delay the ‘appointed day’ until a plebiscite is taken of the people of the six counties, because if a referendum takes place tomorrow there will be a vote against it?