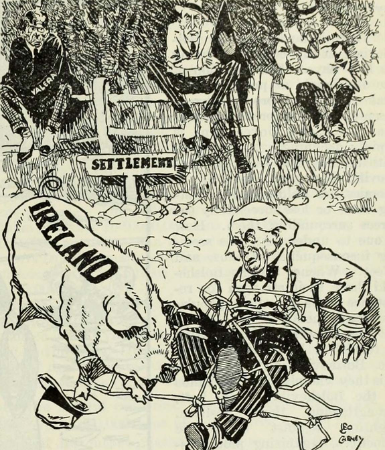 The so-called ‘Irish question’ was one of the defining issues of David Lloyd George’s time as British Prime Minister. The 1920 Government of Ireland Act, which partitioned Ireland into two Home Rule states, was an attempt to solve seemingly intractable religious and political differences on the island of Ireland. However, it was staunchly opposed by Nationalists and some Unionists. For much of the spring of 1921 Lloyd George had refused to delay elections to the new ‘Southern’ parliament, despite repeated pleas to do so by different politicians. In late April 1921, however, it emerged that Lloyd George’s government was considering delaying the election, due to the War of Independence. This prompted a scathing editorial in the Freeman’s Journal, which argued that Lloyd George had grossly underestimated the opposition to partition and the formation of Northern Ireland.

The preliminary Orders in Council dealing with the elections under the Partition Act have already been issued. And now Mr Lloyd George blandly informs Parliament that the Cabinet is ‘considering’ whether it might be advisable to postpone the elections in Southern Ireland. That long after the eleventh hour the Coalition leaders should be, on their own confession, halting thus between two opinions provides an illuminating comment on the declarations with which they have been bombarding the world since the ill-starred measure was introduced.

Sir Hamar Greenwood has fathered many astounding statements, but his pronouncement in the early days of the Bill, that it had secured a larger measure of popular support in Ireland than any previous Home Rule proposal, ranks among his finest imaginative flights. He resolutely turned a deaf ear, not only to the criticisms of the mass of the Irish people, but to the protests of Southern Unionists. The House of Commons was assured again and again that candidates willing to work the measure would come forward in shoals at the right moment.

The ‘Appointed Day’ has come and gone, but the Greenwood candidates remain as intangible as Falstaff’s men in buckram. Even the Government are beginning to realise that the fraud can be no longer persisted in.