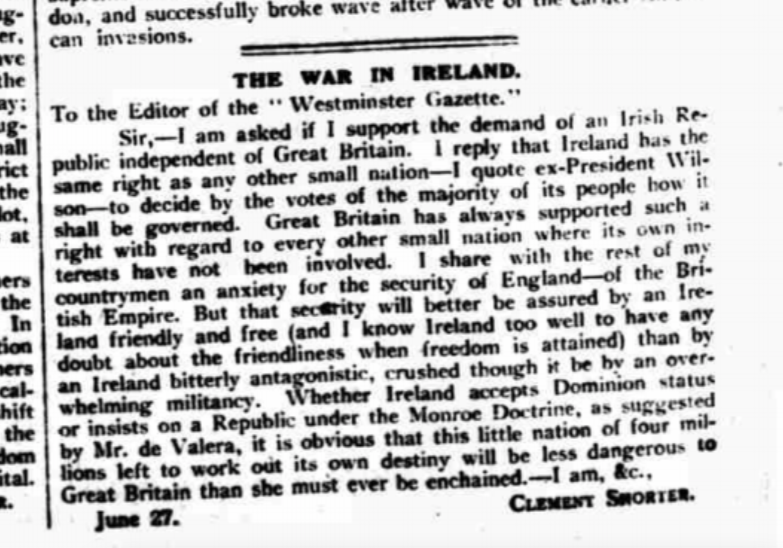 In June 1921 Clement King Shorter (1857–1926), English journalist and magazine editor, wrote to the Westminster Gazette to express his support for an Irish Republic. Shorter was married to the Irish nationalist poet and  Dora Siegerson (1866–1918), who supported the 1916 Easter Rising and organised a campaign to save Roger Casement from hanging.

The War in Ireland

Sir,—I am asked if I support the demand of an Irish Republic independent of Great Britain. I reply that Ireland has the same right as any other small nation—I quote ex-President Wilson—to decide by the votes of the majority of its people how it shall be governed. Great Britain has always supported such a right with regard to every other small nation where its own interests have not been involved. I share with the rest of my countrymen an anxiety for the security of England—of the British Empire. But that security will better be assured by an Ireland friendly and free (and I know Ireland too well to have any doubt about the friendliness when freedom is attained) than by an Ireland bitterly antagonistic, crushed though it be by an overwhelming militancy. Where Ireland accepts Dominion status or insists on a Republic under the Monroe Doctrine, as suggested by Mr. de Valera, it is obvious that this little nation of four millions left to work out its own destiny will be less dangerous to Great Britain than she must ever be enchained.—I am, &c.,