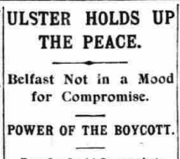 On 4 August 1921, an editorial in the Sheffield Independent blamed Northern Ireland for the recent lack of progress in Irish peace talks. A week after the Dáil cabinet met to discuss British proposals, the paper claimed that the ‘present pause in the development of an Irish peace is due to Ulster’. While it cited the intransigence of local businessmen and politicians, it also speculated that the British government would put pressure on local leaders.

Ulster Holds up the Peace

The present pause in the development of an Irish peace is due to Ulster.

Before the leaders of the majority can go any further, with fair hope of success, they must know what is at the back of the minds of the minority.

Ulster is as hard a nut to crack as ever, unless the talks I have had with leading Belfast business men and members of the Northern Parliament have been altogether misleading.

The only comfort is that England holds a powerful pair of nut-crackers, and in her present mood is likely to use them, in spite of the fact that the nut is of her own growing.

Belfast business men—who control the Parliament—profess the greatest eagerness for peace with the South, whose power to wage an economic offensive they readily admit. The boycott has been damaging, and anarchy over five-sixths of the country might be disastrous.

But when you pass on to discuss the terms of peace, you come in a few steps face to face with a brick wall. You are informed with an air of finality that Ulster will never yield to an Irish Federal Assembly on jot or tittle of the State rights she already possesses, and that she will never enter a Federal Assembly, however limited its powers, except upon terms of absolute equality with the South i.e., one-half of the Assembly to represent six counties and the other half 26 counties.

“We didn’t want the Home Rule Act, but now we have got it, no one can take it away from us,” I have been told again and again.

Judging by appearances, in short Ulster intends to entrench herself behind the Act, and attempt to cow the world with the old slogan, “Ulster will fight, and Ulster will be right.”

Yet appearances may be deceptive. There are several recognised ways of dealing with children who say “shan’t.” Ignoring the more obvious, it may be noted in the present case that Ulster starts her career as a state in a condition approaching bankruptcy. Her Imperial contribution of £8,000,000 per annum is crushing.

Belfast will have a rate of 20s. in the £ next year, and 30,000 of her boycotted Catholic unemployed are only kept off the rates by £5,000 a week of American White Cross money.

There is obviously a wide field here for financial easement at a price. When Ulster protests, as her representatives have done to me, that the price is dishonour, I think the world would be inclined to retort “stuff and nonsense! The price is not dishonour, but salvation.”

That view may finally be Ulster’s own, but it is not likely to be publicly expressed, or even admitted in official negotiations, until a good deal of gentle pressure has been applied by hands are not Irish.

Perhaps it will be applied in London before the week is out.