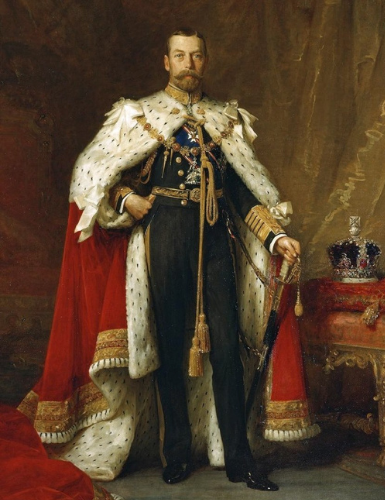 King George V upon his coronation in 1911. © Luke Fildes, via Wikimedia Commons.

The Government of Ireland Act of 1920 partitioned Ireland, creating two home rule states of Northern Ireland and Southern Ireland. The act came into force at a crucial moment in world history, just over a year after the Treaty of Versailles was signed and in the same year that the League of Nations came into being. This speech by King George V to the British Parliament, reported in the Belfast News-Letter, commented on the global conditions affecting Britain, Ireland and the world in 1920.

The King’s Speech: Hope of Unity and Friendship

My Lords and Members of the House of Commons.

My relations with foreign Powers continue to be of a friendly nature, and throughout the year external policy has been conducted in close co-operation with the Allies. The general appeasement of the passions engendered by the war has been assisted by a conference with our late enemies at which certain matters in dispute were satisfactorily adjusted.

The situation which has arisen with Greece will, however, require the earnest attention of my Government, who will, in conjunction with the Allies, endeavour to reach a solution compatible with our joint responsibilities.

In Russia the situation is still unsettled and obscure. I trust that trade will shortly recommence with Russia and that this may lead to an era of peace greatly needed by the sufferings peoples of Eastern Europe. It is of the highest importance, that Poland and her neighbours should compose their political differences, and devote their undivided energies to producing internal stability and to the task of economic reconstruction.

I have accepted mandates under the Covenant of the League of Nations in respect of Mesopotamia, Palestine, certain parts of Africa, and other German possessions in the Pacific Ocean South of the Equator. The mandates for German South-West Africa and the German possessions in the Pacific will be severally administered by the Governments of the Union of South Africa, of the Dominion of New Zealand, and of the Commonwealth of Australia.

It will be the high task of all my Governments to superintend and assist the development of these countries according to their varying degrees of advancement for the benefit of the inhabitants and the general welfare of mankind.

During the past year the League of Nations has come into effective existence. A long series of important measures has been initiated by the Council of the League and the Labour Bureau. The first Assembly of the League has shown its sense of the importance of including all nations in its membership by admitting two of our late enemies. It is my hope that the spirit of harmony and goodwill between nations manifested at the Assembly is an augury of the value of the League as a force making for conciliation and peace throughout the world.

King George V upon his coronation in 1911. © Luke Fildes, via Wikimedia Commons.