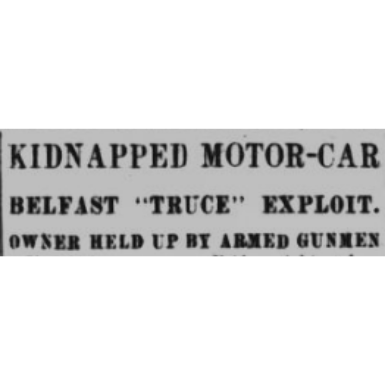 Rolls Royce is still missing after an ambush in West Belfast by Sinn Féin gunmen.

OWNER HELD UP BY ARMED GUNMEN

Mr. Massey (accompanied by 3 other men) was returning from Hannahstown, where they had been in connection with the purchase of cattle.

When they reached Whiterock Road (just beside the City Cemetery at the top of the Falls Road) four armed men rushed out from a place of concealment. They brandished revolvers and called upon the occupants of the car to put up their hands. The car was pulled up and the owner and his friends were then ordered to dismount.

The Sinn Féiners took their seats, and with revolvers drawn promptly drove away, saying the car would be returned at 10 o'clock.

But the car did not return, and notwithstanding an energetic search by the police in Belfast and surrounding areas it had not been found this morning. The registered number of the vehicle was OI-5333, but this plate was probably changed to prevent detection.