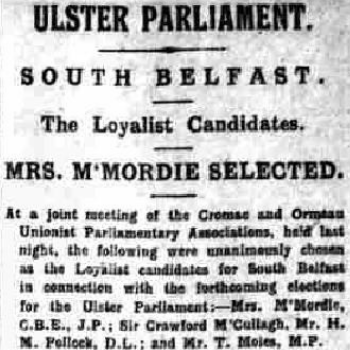 By the spring of 1921 preparations were well underway for the upcoming elections to the new Northern Ireland parliament, established under the Government of Ireland Act of 1920. In April Julia McMordie was selected to be the Unionist candidate for South Belfast. McMordie was no stranger to Unionist politics – her husband Robert McMordie had served as Belfast’s Lord Mayor from 1910–1914 – but her selection was a significant moment, coming just three years after some women were granted the right to vote. McMordie had actually opposed the introduction of female suffrage, but this did not stop her accepting the election nomination. She went on to win the South Belfast seat, one of only two women – the other being the Unionist MP Dehra Chichester – to sit in the first Northern Ireland parliament.

At a joint meeting of the Cromac and Ormeau Unionist Parliamentary Associations, held last night, the following were unanimously chosen as the Loyalist candidates for South Belfast in connection with the forthcoming elections for the Ulster Parliament: Mrs McMordie, CBE, JP; Sir Crawford McCullagh, Mr HM Pollock, DL; and Mr T Moles, MP. …

The Chairman, addressing the candidates, said that he had to convey to them the unanimous vote of that meeting selecting them as the candidates for South Belfast at the forthcoming election. In spite of the order in which the names occurred in the resolution, he thought they should mark Mrs McMordie to address them first (Applause).

Mrs McMordie said she did not at all feel that she ought to come first, because though she might be the oldest of the quartette (laughter) – she thought she was the last to be chosen. She wished they could have got a better representative, but as they had honoured her with their confidence she could assure them that she would do her best to fight the Unionist cause in South Belfast. (Applause.)

She was not going to make a speech, because the honour was quite new to her. She had no idea that she would be wanted for the Ulster Parliament. Although she was not an Ulsterwoman by birth she could claim to be perhaps a better Ulsterwoman than some who were born in the province. In their case it was an accident of birth, but in her case it was a free choice – (laughter and applause) – and she was glad to say she had never regretted it. (Applause.) If she could do anything to help forward the cause of Ulster she would be only too willing to do it. (Hear, hear.)

She thought she might claim to be a good worker, and at any rate she would always vote with her party and support Sir James Craig – (applause) – and through him Sir Edward Carson – (renewed applause) – in any undertaking that they put forward. (Applause.)