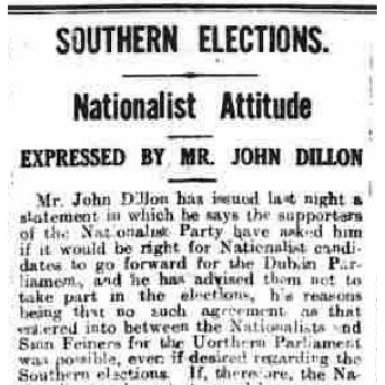 On 8 May 1921 John Dillon, former leader of the Irish Parliamentary Party, issued a statement outlining his thoughts on the upcoming elections and the reasons why the Nationalist Party should not stand candidates for the Parliament of Southern Ireland. The party did not contest the election and all 128 candidates (124 Sinn Féin and 4 Unionists) were returned unopposed.

Mr. John Dillon has issued last night a statement in which he says the supporters of the Nationalist Party have asked him if it would be right for Nationalist candidates to go forward for the Dublin Parliament, and he has advised them not to take part in the elections, his reasons being that no such agreement as that entered into between the Nationalists and Sinn Feiners for the [N]orthern Parliament was possible, even if desired regarding the Southern elections.

If, therefore, the Nationalists took part it would be as opponents of the Republican Party, and contests of such a character would create bitter feeling, and might result in disorder and bloodshed. For results such as these he could not hold himself responsible, particularly at such an acute crisis in Ireland’s future, and in view of the peace rumours so prevalent for the past few days. Again, even if peaceful elections could be held, Nationalists would find it very difficult to put forward a clear issue on which they could challenge a verdict.

Although still irreconcilably opposed to the methods and programme of the Republican Party, and holding more strongly than ever to his position in the 1918 elections, Mr. Dillon says he is compelled to recognise that in the present crisis of Ireland of the policy and proceedings of the British Government for the past three years make it practically impossible to fight Sinn Fein at this election. To condemn Sinn Fein would lay one open to the charge, however unjust, of supporting the Black and Tans Auxiliary Police and the whole policy of Greenwood and Company.

The Government have sown dragon’s teeth and were now faced with a full harvest, and until the Government recognised the blunder and undid it so far as can now be undone, there can be no peace. Mr. Dillon says during last year the constitutional movement had steadily regained ground, that if a free election were possible it would be shown that the Nationalist Party represent a big section of Irish opinion.

Referring to the fundamental difference between the Nationalist and Sinn Fein policies, he says the former hold that the Irish question can best be settled by compromise with the Republicans. The latter holds that it can only be settled by driving the British forces outside Ireland by total separation. On such consideration Mr. Dillon feels the Nationalists are obliged to stand aside from the present elections.