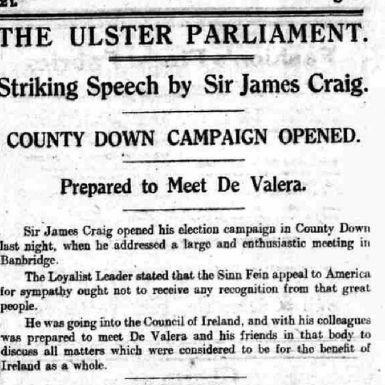 On 2 May 1921, the day before the Government of Ireland Act came into operation, the Ulster Unionist leader James Craig formally opened his campaign for the new Northern Ireland parliament at the Orange Hall in Banbridge, Co. Down. While Craig claimed in his speech that he was willing to meet the Sinn Féin leader Eamon de Valera within the new Council of Ireland, he asserted that Ulster Unionists would not give up the ‘rights and privileges’ afforded to them by the Government of Ireland Act.

Sir James Craig opened his election campaign in County Down last night, when he addressed a large and enthusiastic meeting in Banbridge. The Loyalist leader stated that the Sinn Fein appeal to America for sympathy ought not to receive any recognition from that great people. He was going into the Council of Ireland, and with his colleagues was prepared to meet De Valera and his friends in that body to discuss all matters which were considered to be for the benefit of Ireland as a whole.

The limit of their compromise in the immediate future has been reached (Loud applause). Whatever the future might bring forth Ulster stood today prepared to make the best of the Act, which had been passed against her desire and her wish; but she was not prepared under any circumstances whatever to give up the rights and privileges which had been granted under that Act and the bond of union between themselves and Great Britain and the rest of the Empire.

… The first duty laid down in the Act was to form a Council of Ireland. He proposed with the approval of his colleagues to go into that Council himself, and if Mr De Valera and his party were supreme in the Parliament in the South and West it was for him then to head his quota of the Council of Southern Ireland, and to meet his (Sir James Craig’s) Northern colleagues and himself to discuss all matters which were considered to be for the benefit of Ireland as a whole.’