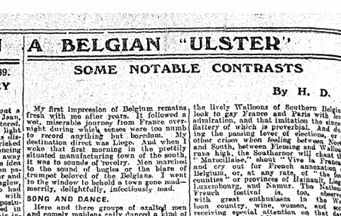 In July 1921, Sunday Independent columnist ‘H. D.’ contrasted Belgium and Ireland, comparing the differences between Flemings and Walloons to those living in the north and south of Ireland.

A Belgian “Ulster”: Some Notable Contrasts

…Which exactly could be designated “Ulster” in Belgium—Flanders or the Walloon country? I came to know Flanders and the Flemish later. They are certainly of the North. They are also dour, and suspicious, and unsociable—until you come to know them, at least—unlike the gay, welcoming, and frank people of the South. Then, again, Flanders is mainly agricultural, whereas it is in the South or Walloon country that industrial activity is predominant. Then, as to religion, while all Belgium is nominally Catholic, the Flemish are the backbone of the Church in Belgium – whereas in the manufacturing towns of the South, as well as in its capital, Socialism and anti-clericalism are strong in influence. This movement is particularly bitter in Belgium owing to one of the political parties there being actually known as the Catholic Party, so that parties and religion have become intricately involved, and those who are opposed in policy to this party are, as well, truculently anti-Catholic. This latter party has made little headway amongst the pious Flemish.

Again, just as dour Ulster looks to stolid England and the Imperial Parliament, so the lively Walloons of Southern Belgium look to gay France and Paris with love, admiration, and that imitation the sincere flattery of which is proverbial. And during the passing fever of elections, or at other crises, when feeling between North and South, between Fleming and Walloon runs high, the Southerner will chant the “Marseillaise,” shout “Vive la France,” and cry out for French annexation of Belgium, or, at any rate, of “the four counties” or provinces of Hainaut, Liege, Luxembourg, and Namur. The national French festival is, too, observed with great enthusiasm in the Walloon country, wine, women, and song receiving special attention on that day. But the mention of France or of the French to a native of Flanders is as if one tried bring home to the soul of a Cork or Kerry man to-day the glories of “our British Empire. The sight of the French tricolour which can set Walloons in a frenzy of enthusiasm is to the Flemish of Belgium as that of a red rag to a bull.

Withal—while there is no comparison that can be made between Gaelic and Flemish beyond merely that of a sentimental sympathy on the part of the Gael for any people, or group of people, striving to preserve their language, yet in a small sense the Flemish of Belgium are as the lovers of the Gaelic tongue in this country. The Flemish are making a similar heroic fight. They display similar enthusiasm. During the great war the Germans held out to them the bait of making Ghent University completely Flemish—though, incidentally, of course, such a step would help along the Pan-German ideal. The Flemish have their league, their clubs, their classes, their organisers, and propaganda. But Flemish is undoubtedly an offshoot of Dutch. And though there is a Flemish literature and a Flemish tradition, created by immortal Flemish authors, dealing with Flemish life and ideals, yet in the schools Dutch grammars and school books are as often used for instruction in Flemish.

Thus, to sum up geographically, and in regard to the dour, obstinate character of its inhabitants, in perpetual conflict with the ideals, traditions, and policy of the people of the south, Flanders may be cited as the Ulster of Belgium, and the gay debonair south or Walloon country, with the laughter of its people, their insolent wit at the expense of the slow, stubborn Flemish, and, notwithstanding their usual good humour, their rigour and determination in a fight may be compared with the south and west of Ireland. Yet in that the Walloon country is the industrial country, that anti-Catholicism is stronger there, and that its inhabitants looks to the dominant neighbouring country for their ideals and guidance—there is a parallel with Ulster. While the predominantly agricultural Flanders, the strong Catholicism of its people, and their determination to bare their own language and ideals would, in spite of the dourness and even dullness of the Flemish character, suggest that they might “kinship claim” with the south and west of Ireland—and “have their claim allowed” …