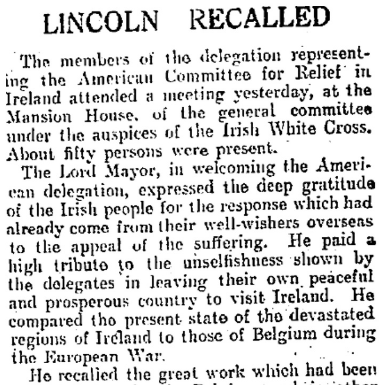 The Irish White Cross was founded in February 1921 to assist with relief and reconstruction across the country from the ongoing Irish War of Independence. Run mainly by Quakers, it worked closely with relief organisations in the United States to distribute funds raised there for Irish relief. The Freeman’s Journal reported on the first Dublin meeting between the Irish White Cross and the American Committee for Relief in Ireland, in which the visiting delegates expressed their hopes for a wide-ranging relief programme.

Photograph in the Freeman’s Journal of the White Cross meeting in Dublin.

The members of the delegation representing the American Committee for Relief in Ireland attended a meeting yesterday, at the Mansion House, of the general committee under the auspices of the Irish White Cross. About fifty persons were present.

The Lord Mayor, in welcoming the American delegation, expressed the deep gratitude of the Irish people for the response which had already come from their well-wishers overseas to the appeal of the suffering. He paid a high tribute to the unselfishness shown by the delegates in leaving their own peaceful and prosperous country to visit Ireland. His lordship reminded the visitors of the many sacrifices Irishmen had made for America in the past, and of the traditional bond of union which had always existed between the two countries.

Mr C.J. France, chairman of the delegation, replying to the Lord Mayor’s address, said a deep impression had been made upon himself and his colleagues by the simplicity and straightforwardness of the Irish character, as shown by those whom they had met since their arrival in the country. He saw those characteristics illustrated in the Lord Mayor to a degree which made him recall the memory of Lincoln, one of the greatest of Americans.

It was on February 12, the anniversary of Lincoln’s birthday, observed annually in America, he said, that they had first reached Dublin. In witnessing the idealism of the Irish character he felt that Ireland had achieved some of the admirable things of the spirit which are unattained by those concerned only with material things.

Mr France reminded the audience of traditions of goodwill to all men which had always been manifested by the Society of Friends, to which his colleagues belonged. They had already begun practical work, he said, by a visit that morning to Plunkett House, where they had ‘found in George Russell (‘AE’) a man at once poet, painter, philosopher, and practical economist, a combination which, he felt free to say, was seldom produced in America.

The delegates wished in a message to bring home to the people of America the wide nature of the relief problem presented to them in Ireland. They looked upon this need of relief, they stated, as being more than the question of immediate relief merely, although that, too, must be taken care of, and they expressed the confident hope that a wise programme of reconstruction might be adopted.