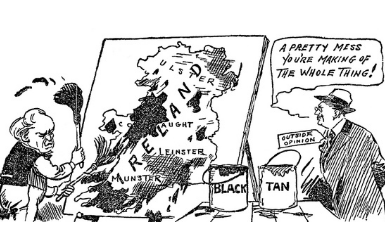 Cartoon in the Sunday Independent on Lloyd George's deployment of Black and Tan forces in Ireland.

The practice of large-scale reprisals by British forces and IRA troops was one of the grimmest elements of the War of Independence. Reprisals by British troops were widely condemned by nationalists, but as this article from The Times shows, they were condemned equally in certain sections of British society, including at the highest levels of government. At the National Liberal Club in London, independent 'wee free' Liberal MPs condemned the coalition government, led by Liberal David Lloyd George, for allowing reprisals to continue. Although some of the coalition Liberals attempted to defend the Prime Minister, a declaration that reprisals were a ‘wicked’ policy was met with cheers.

Dissensions between Coalition and Independent Liberals caused noisy and disorderly scenes at a meeting held at the National Liberal Club yesterday for the purpose, in the words of Mr. J. Robertson, who presided, of ‘making a considered and emphatic declaration’ on the Irish question.

The official resolution was in the following terms: ‘That this meeting of members of the National Liberal Club indignantly condemns alike the murders and outrages in Ireland and the policy of reprisals, deplores the condonation by the Prime Minister and other members of the Government of the policy of reprisals, and dissociates the National Liberal Club from any acquiescence in this policy which is the direct negation of Liberalism’.

This was eventually declared carried amid much confusion, Colonel John Ward trying in vain to speak, and the meeting broke up in disorder.

The Coalition Liberal members of the club afterwards passed a resolution repudiating the resolution associating the Prime Minister with the condonation of murder and reprisals, and condemning the ‘utterly illiberal’ methods of the chairman.

Mr F.C. Thornborough proposed the official resolution. His statement that the Prime Minister had condoned the policy of reprisals was greeted with repeated cries of ‘Withdraw’, and there were further interruptions during the speech of Major H. E. Crawford, Liberal candidate for West Walthamstow. He declared that the present condition of Ireland was the direct result of ‘deliberate betrayal in his own party interest by the Prime Minister’, who he said ‘betrays every cause he undertakes’.

Mr Charles Baker rose, ignoring cries of ‘Sit down’, and exclaimed: ‘The speaker has charged Mr. Lloyd George, who is an honoured member of this club – (loud cries of ‘No’) – with being a betrayer of every cause which he undertakes. This is a lie.’

Sir John Simon, who followed, appealed for reasoned argument. He said the Government policy was both wicked and stupid, because it was steadily driving every one in Ireland, who was disposed to be reasonable and moderate, into the arms of the rebels. The time had come for every man of Liberal breed to say, ‘We must have this hopeless, wicked, stupid policy stopped.’ (Cheers)

Cartoon in the Sunday Independent on Lloyd George's deployment of Black and Tan forces in Ireland.