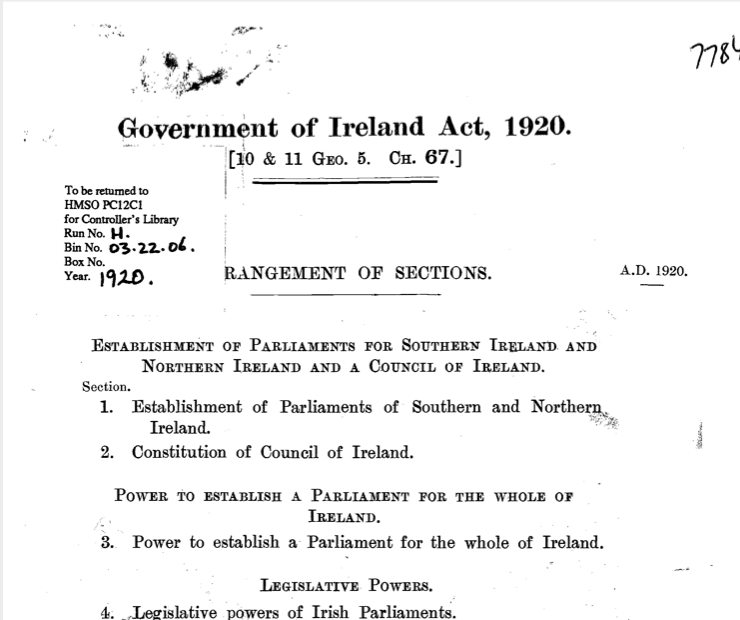 The Government of Ireland Act of 1920 partitioned Ireland, creating two home rule states of Northern Ireland and Southern Ireland. This report from the Belfast News-Letter on Christmas Eve 1920 explained to its readers the structure and powers of the new ‘Northern’ and ‘Southern’ parliaments that would now govern their daily lives. It highlighted the powers that would continue to be reserved at Westminster, and how the act provided for the possible creation of a single, united Irish home rule parliament.

The New Parliaments: Constitution and Powers

The following is a summary of the provisions of the Act as it will be put into operation:

The Parliament of Southern Ireland consists of a House of Commons of 128 members and a Senate c[o]mprising the Lord Chancellor of Ireland, the Lord Mayors of Dublin and Cork, 17 Senators representative of commerce, labour, and the professions, nominated by the Lord Lieutenant, and 44 elected Senators, including four Archbishops or Bishops of the Roman Catholic Church, two of the Church of Ireland, 16 Peers, eight Privy Councillors, and 14 representatives of County Councils.

The Senates may not amend Bills so far as they impose taxation or appropriate revenue or moneys for the service of the Governments of Southern or Northern Ireland, and may not amend any Bill so as to increase any proposed charges on the people. In cases of disagreement between the House of Commons and the Senate in either part of Ireland, provision is made for a joint sitting of the members of both Houses.

Ireland is to return 40 members to the Parliament of the United Kingdom.

The President is to be appointed by the King. The main duty of the Council is to look after the railways and the fisheries, and to administer in common services which might by agreement between the two Parliaments be delegated to it.

By identical Acts of the two Parliaments a united Parliament (of two Chambers) may be set up for the whole of Ireland.

The Irish Parliaments are not empowered to make laws in regard to certain matters, such as the Crown, peace or war, Navy, Army, or Air Force, treaties or foreign relations, titles, trade outside Ireland, submarine cables, wireless telegraphy, coinage, legal tender. Control of the police is reserved for three years from the appointed day. The postal service, design of stamps, registration of deeds, Public Record Office are to be transferred to the Irish Government on Irish union.

The clauses dealing with finance establish an Exchequer and Consolidated Fund for Northern and Southern Ireland respectively. Irish Parliaments are given full power over taxation, except in regard to Customs, Excess Profits Tax, Corporation Tax, and Income-tax, including super tax. It is not competent for them to impose any tax on capital. The Parliaments have power to grant relief from Income-tax and super tax.

High Courts of Justice are set up in Northern and Southern Ireland, with one High Court of Appeal for all Ireland.

If half of the members of either Parliament fails to take the oath or are not validly returned the Parliament will not be regarded as properly constituted, and the Government of the area will subsequently be administered on Crown Colony lines. Such a contingency having arisen, the Imperial Parliament may renew attempts to get a Parliament set up, but it is stipulated that after the first unsuccessful attempt the two Houses at Westminster, acting together, should be in a position to exercise a veto on any subsequent attempt. The Order calling for the election of a new Parliament will lie on the table of both Houses for 30 days, and if no exception is taken by both Houses the executive may proceed with another endeavour.