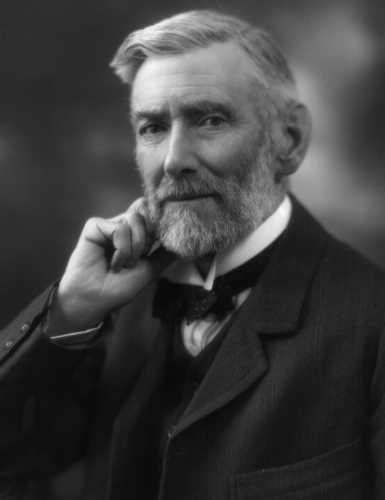 The Irish Dominion League was founded in June 1919 in opposition to partition on the island of Ireland. Its members hoped instead to achieve Dominion status, with Ireland remaining in the British Empire. The League never attracted significant support in Ireland or Britain, and it was disbanded in 1921 shortly before the passage of the Anglo-Irish Treaty. However, some clearly felt its activities to be a threat. This extract from the Belfast News-Letter, reporting on a League meeting in Dublin, suggested that the League was conspiring to overturn the 1920 Government of Ireland Act.

The Irish Dominion League, of which Sir Horace Plunkett is founder, still obsessed with the idea that it is composed of ‘moderate’ men, is endeavouring to bridge the alleged gap between itself and Sinn Féin.

A conference was held in Dublin on Wednesday, and a series of extraordinary resolutions was adopted. The main point on which the conference agreed apparently was to wreck the Home Rule Act, if possible.

The meeting was held privately at the Shelbourne Hotel on Wednesday, but subsequently a report was issued which stated that the conference took place under the auspices of the Irish Dominion League to consider the present and prospective condition of public affairs in Ireland. Invitations were sent, not only to members of the League, but to many representative Irishmen desirous for a settlement of the Irish question, though not identified with the League programme. …

General Sir Hubert Gough, in a letter regretting his inability to attend, said:

I should value the opportunity, at this critical point in Irish affairs, of taking my stand with those who see, in the fullest national self-government, with legislative, fiscal and financial independence, on Dominion lines, the only possible basis for attaining a lasting peace. The present Act settles nothing, and I believe – though I do not claim to be an expert – that its financial provisions are not only most unjust, but threaten grave dangers to the interests of every class of the community of Southern Ireland, as well as great difficulty and confusion in their working.

The people of Ireland are being cruelly mishandled by the Government. From every point of view I feel that the prudent, as well as the honourable and patriotic, course for the Irish moderates is to go as far as possible with the majority of their fellow-countrymen, and not allow themselves to be manoeuvred into a lasting antagonism towards them on the question of accepting Dominion status, in lieu of claiming sovereign independence.

In the matter of some of the features of their insurrectionary methods there are differences between them and ourselves; but, subject to these points of principle, the more we can co-operate with them in political, social, and administrative action, and in pressing the fullest legitimate claims of Ireland, the more we shall deserve and earn their confidence, and the better we shall be serving the cause of peace in Ireland, of peace with England, and of peace throughout the world.

A discussion (says the report) took place as to the attitude to be assumed by the Irish moderates towards the coming elections in Southern Ireland. The general sense of the meeting, with only two or three dissentions, was against working the Southern Parliament, under protest or otherwise.

… Another resolution declared that the only possible basis for an enduring peace in Ireland was full national self-government, such as is enjoyed by the Dominions overseas, with legislative, executive, financial, and fiscal independence, conditioned by an agreement for the safeguarding of the strategic safety of Ireland and Great Britain. The resolution called upon the Government to take the first step by making a firm offer of such a settlement, with a preliminary truce, accompanying it by a pledge, on peace ensuing, to grant an amnesty, and to make provision, by way of reparations, for indemnifying private owners and the ratepayers at large from the losses inflicted upon them during the recent troubles by Government or insurrectionary forces.

A further resolution asserted that the Government of Ireland Act, 1920, was not merely unacceptable, but actually constituted a grave invasion of such national rights as remained to Ireland under the Treaty of Union, 1800.