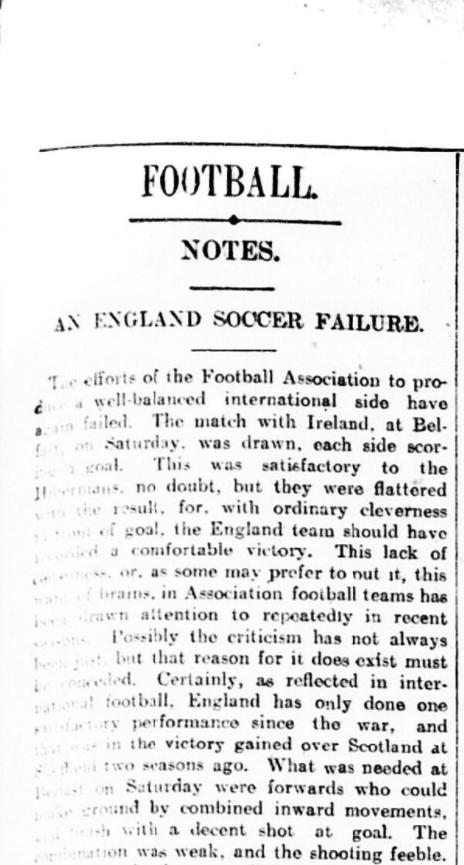 Sports rivalries often echo political rivalries. This account in the Yorkshire Post of a football match between England and Ireland avoids politics, but still expresses a deep bitterness at England’s loss. Interestingly, this match came after the Football Association of Ireland (FAI) split from the Irish Football Association (IFA) over dissatisfaction at the IFA’s supposed Belfast-centric perspective. The team fielded for “Ireland” on 22 October was organised by the IFA, which in practice only had jurisdiction over Northern Ireland after the split (although many players from across the island played for them). The FAI fielded another team called “Irish Free State” from 1924 to 1936, when the FAI changed their team name to “Éire” or “Ireland”. This resulted in a bizarre situation where two rival football associations were fielding teams called “Ireland” on the international stage, with many players playing for both. This situation only ended in 1953 when the FAI changed their team name to “Republic of Ireland”, and from 1954 the IFA called their team “Northern Ireland”.

The efforts of the Football Association to provide a well-balanced international side have again failed. The match with Ireland, at Belfast on Saturday, was drawn, each side scoring a goal. This was satisfactory to the Hibernians, no doubt, but they were flattered with the result, for, with ordinary cleverness in front of goal, the England team should have recorded a comfortable victory. This lack of cleverness, or, as some may prefer to put it, this want of brains, in Association football teams has been drawn attention to repeatedly in recent seasons. Possibly the criticism has not always been just but that reason for it does exist must be conceded. Certainly, as reflected in international football, England has only done one satisfactory performance since the war, and that was in the victory gained over Scotland at Sheffield two seasons ago. What was needed at Belfast on Saturday were forwards who could make ground by combined inward movements, and finish with a decent shot at goal. The combination was weak, and the shooting feeble. The England selectors will have to do their work afresh, and in the trial matches which have to be played, it is to be hoped they will be able to include some amateur talent – and persevere with it.

The one personal success in the England team on Saturday was G. Wilson, the Sheffield Wednesday centre half, who after only one year’s international experience had the honour of captaining the Eleven. Wilson is a young man, and with good fortune should have several years of international football before him. Moreover, if he continues to develop as he has during the last twelve months in “big” football, he should come to be such a dominant centre half for England as Alex Raisbeck and Charlie Thompson [sic] used to be in Scottish international contests. Wilson’s style now is more polished than that of his two England predecessors, Wedlock and McCall, ever was, though experts will deny the usefulness of both those centre halves. But what boots a good centre half if the inside trio in front of him are dull and unsuitable. The most brainy inside forward in England football to-day is Charles Buchan, of Sunderland. The international selectors do not appear able to make up their minds as to when and in what position he ought to be played, yet at centre forward last season his was the only impressive performance. As a point of local interest regarding the Belfast match, it may be noted that the scorers of the respective goals, Gillespie for Ireland, and Kirton for England, were brought into English League football by the Leeds City Club. Kirton at the City’s “request” was knocked down to Aston Villa.