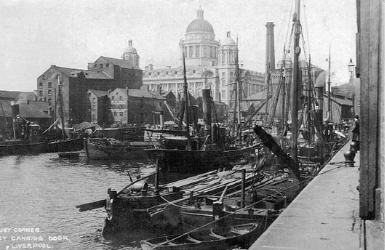 Canning Dock, Liverpool. The city was a major hub for Irish emigrants to both Britain and America. © Wikimedia Commons.

Emigration levels from the island of Ireland had always been relatively high compared to other countries during the early 20th century. However, as this report from the Irish Independent shows, the upheavals associated with the War of Independence was causing almost unprecedented numbers to seek opportunities elsewhere. In February 1921 alone almost 2,000 people left for the United States or Britain. The newspaper expressed widely held fears that if these trends continued the island of Ireland would be gradually but irretrievably impoverished through the drain of talent to other countries.

Ireland lost by emigration in February 1,881 persons, or 1,512 more than the corresponding month of last year, or 1,361 more than the average of the ten years 1910–1919. In no month of February since 1910 has emigration been so high. Munster supplied the largest number of emigrants, and Connaught came next; but going back to 1920 we find that as many emigrated from Ulster as from Leinster and Connaught combined.

Of the emigrants in February 1,695 went to the United States and only 30 Great Britain. Passages were paid for in America in respect of 364 of the emigrants to the country. If during the coming months the record of February is exceeded or even maintained, the drain by emigration will again, unfortunately, have become disquieting.

Canning Dock, Liverpool. The city was a major hub for Irish emigrants to both Britain and America. © Wikimedia Commons.