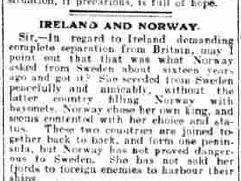 In August 1921, the London Daily News printed a letter from J. Knowles, who compared Irish demands for independence to those of their Norwegian counterparts in the earlier part of the twentieth century. In 1905, Norway’s union with Sweden was dissolved after a Norwegian plebiscite backed dissolution and Sweden later recognised Norway as an independent constitutional monarchy. Prince Carl of Denmark (Haakon VII) was then King of Norway until his death in 1957.

Sir,—In regard to Ireland demanding complete separation from Britain, may I point out that that was what Norway asked from Sweden about sixteen years ago and got it? She seeded from Sweden peacefully and amicably, without the latter country filling Norway with bayonets. Norway chose her own king, and seems contended with her choice and status. These two countries are joined together back to back, and form one peninsula, but Norway has not proved dangerous to Sweden. She has not sold her fjords to foreign enemies to harbour their ships.

Why should we be so afraid of what Ireland would do if quite separated from us? How can a little island, with no army or navy, and no war factories—how can such a small nation be a danger to England? In the fable the lion said he was in danger from the lamb. Why may Poland be restored as a nation, why may Wales have her national festival carried out in her own language, and why may the Isle of Man have its own parliament, and Ireland alone of distinct nations be dragooned into submission?

Many people now believe that if Ireland were made really contended her proximity to England would be an asset and not a danger.