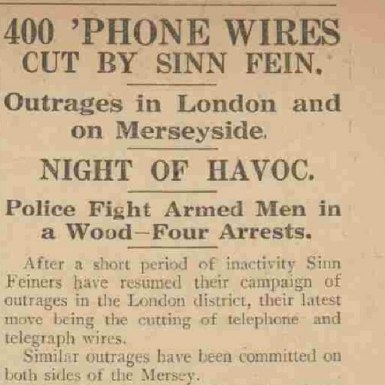 From November 1920 the IRA – referred to in the British and Unionist media at the time as Sinn Féiners – began a campaign of sabotage in locations across England and Wales, including arson attacks and the cutting of telegraph wires. In June 1921, several reports emerged of attacks in London and the north-west of England. While these incidents were relatively minor in comparison to the violence in Ireland, they show that militant republicans were using a range of tactics to influence British opinion.

After a short period of inactivity Sinn Feiners have resumed their campaign of outrages in the London district, their latest moves being the cutting of telephone and telegraph wires.

Similar outrages have been committed on both sides of the Mersey.

In consequence, it is understood, military patrols are being organised for the purpose of protecting telegraphic communications.

A covered motor-car, without lights and bearing no number plate, was seen in Cranford-avenue, Bath-road, Harlington, late on Tuesday night, reports Scotland Yard.

Two men got out of the car and climbed up a telegraph role, while four others stood near the car.

Held up by Armed Men

A passing pedestrian was stopped and held up at the point of the revolver until the two men had descended the pole, when all of them re-entered the car and drove away.

It was subsequently discovered that forty-two telegraph wires had been cut. Altogether about 200 wire have been severed in the London area…

A series of wire-cutting outrages took place in rural districts round Liverpool at Huyon, Gattacre, Garston, and on the Cheshire side of the Mersey near Bromborough Station.

In Wheathill Wood, near Gatacre, where 100 wires were severed, there was a fight between police cyclists and three of a party of supposed Sinn Feiners, and one bullet grazed an officer’s head.

The men had cut the wires and taken refuge in a wood. A force of police surrounded the wood until the morning, but the men had escaped.

On the Cheshire side four young Irishmen were arrested and later remanded at Birkenhead County Police Court.