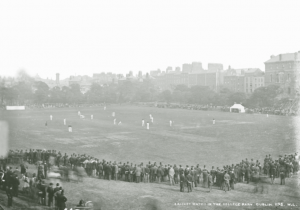 A cricket match at College Park in the early 1900s. The marquee to the right is roughly where Kathleen Wright was shot (NLI)

On 3 June 1921 two members of the IRA, Paddy O’Connor and Jim McGuiness, fired shots at a cricket match involving a team of British soldiers at College Park, Trinity College Dublin. Kathleen Alexanderson Wright, a student at Trinity, was killed by a bullet to the back. Another spectator was shot in the arm, possibly by the same bullet that killed Wright.

The two-day match between the Gentlemen of Ireland, a first-class team founded in 1846, and the ‘Military of Ireland’, which was made up of cricketing troops stationed on the island during the War of Independence, was held to mark Warrior’s Day. At 5.30pm, as the Irish time were cruising to a surprise victory, O’Connor and McGuiness, under orders to stop the match, cycled to the railings at the Nassau Street side of the ground and fired their revolvers in the general direction of the players, killing Wright.

Kathleen had attended the match with her fiancé George Hubert Ardill, the son of a Sligo clergyman, and was a member of a prominent Anglo-Irish Protestant family. Remarkably the match resumed after the shootings, until the provost of Trinity, John Henry Bernard, abandoned the game half an hour later after Wright’s death was confirmed.

An appalling outrage was perpetrated by Sinn Feiners in Dublin yesterday, resulting in the death of Miss Kathleen Alexanderson Wright, only daughter of Rev. Ernest Alexanderson Wright, M.A., of Clapham Park Vicarage, London, a student of Trinity College, and the wounding of another lady, whose name has not yet been ascertained.

A cricket match was being played in the College Park, between the Gentlemen of Ireland and the Military of Ireland, in aid of Warriors’ Day. In view of the attractiveness of the match and of the good cause for which it was organised, there was a large attendance of spectators.

The game had been in progress for several hours when, suddenly, shortly before 6 p.m., from the direction of the railings of the park along Nassau Street, shots were fired, obviously at the officers and men of the Military of Ireland, who were fielding at the time. Great commotion followed, and all the players threw themselves on the ground. None of them were hit, but Miss Wright, who was with her fiancé, Mr G. H. Ardill, son of Canon Ardill, of Sligo, watching the match, was wounded in the chest. They were sitting on the Nassau Street side of the Park, almost opposite the Kildare Street Club. At first she did not realise she was hit; but then exclaimed to her fiancé: “Oh! I have a terrible pain in the chest”, and collapsed. Two doctors rendered first aid, and a St. John’s ambulance was quickly on the scene. The unfortunate lady died, however, before she could be removed to hospital.

The match was continued, but shortly before 6.30 the Provost learned that Miss Wright was dead, and play was abandoned for the day.

Miss Wright was an art student at Trinity College, and Mr Ardill is also a student. Their engagement was announced last month.

The murderers were seen with revolvers in their hands in Nassau Street, and after their deadly work they mounted bicycles and rode away.

A cricket match at College Park in the early 1900s. The marquee to the right is roughly where Kathleen Wright was shot (NLI)