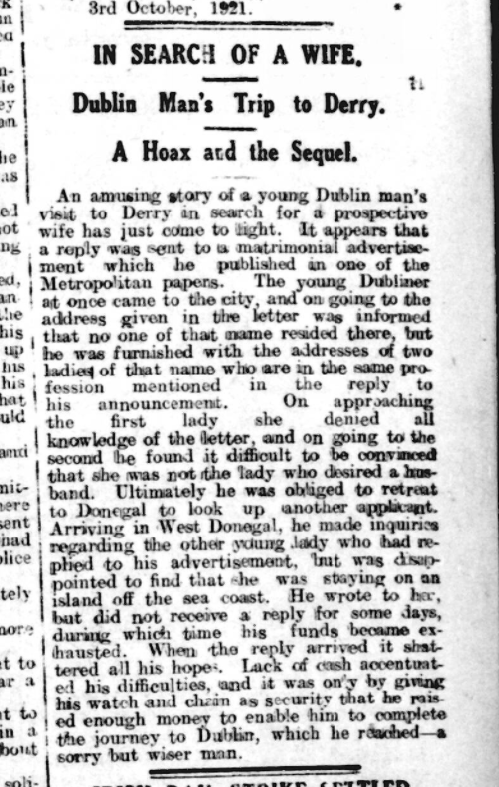 Despite the momentous political developments in Ireland in 1921, even the most politically dedicated newspapers made space for lighter fare. This article from the Derry Journal, a nationalist tri-weekly with a broad circulation in the local area, poked light fun at a naïve young Dubliner travelling to Derry/Londonderry to find a wife after posting in the matrimonial adverts section of a daily newspaper. These columns were spaces for young single people to advertise to meet potential partners. This unfortunate Dubliner received responses from women based in the northwest of Ireland, so made the 150-mile journey to meet with his potential brides. His trip did not go to plan…

IN SEARCH OF A WIFE.

A Hoax and the Sequel.

An amusing story of a young Dublin man’s visit to Derry in search for a prospective wife has just come to light. It appears that a reply was sent to a matrimonial advertisement which he published in one of the Metropolitan papers. The young Dubliner at once came to the city, and on going to the address given in the letter was informed that no one of that name resided there, but he was furnished with the addresses of two ladies of that name who are in the same profession mentioned in the reply to his announcement. On approaching the first lady she denies all knowledge of the letter, and on going to the second he found it difficult to be convinced that she was not the lady who desired a husband. Ultimately he was obliged to retreat to Donegal to look up another applicant. Arriving in West Donegal, he made inquiries regarding the other young lady who had replied to his advertisement, but was disappointed to find that she was staying on an island off the sea coast. He wrote to her, but did not receive a reply for some days, during which time his funds became exhausted. When the reply arrived it shattered all his hopes. Lack of cash accentuated his difficulties, and it was only by giving his watch and chain as security that he raised enough money to enable him to complete the journey to Dublin, which he reached – a sorry but wiser man.