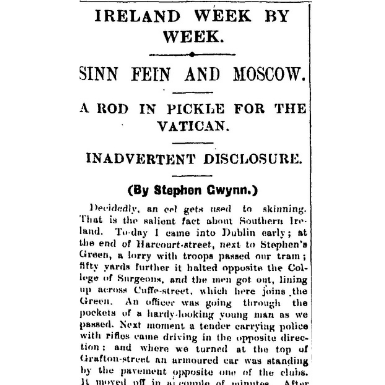 The following report, written by Stephen Gwynn, The Observer’s Irish correspondent, provides an eyewitness account of the impact of the War of Independence in Dublin and Donegal. He describes disruptions to daily life, population shifts, and a decline in tourism. These observations came shortly after the burning of the Custom House and only one month before a truce began on 11 July 1921, followed by the signing of the Anglo-Irish Treaty on 6 December 1921.

Decidedly, an eel gets used to skinning. That is the salient fact about Southern Ireland. To-day I came into Dublin early; at the of Harcourt-street, next to Stephen’s Green, a lorry with troops passed our tram; fifty yards further it halted opposite the College of Surgeons, and the men got out, lining up across Cuffe-street, which here joins the Green. An officer was going through the pockets of a hardy-looking young man as we passed. Next moment a tender carrying police with rifles came driving in the opposite direction; and where we turned at the top of Grafton-street an armoured car was standing by the pavement opposite one of the clubs. It moved off in a couple of minutes.

After observing this concentration of force on Stephen’s Green, I was reading in the National Library when I heard a bomb go off, followed by revolver fire, then another bomb. I learnt at lunch that the scene of the bomb throwing was where I had seen the man being searched—a prompt reply to the concentration. My neighbour at table seemed surprised that I should enquire about the matter. “I don’t notice these things any more,” he said. Like the eel, in fact, apparently he was less inured to the weather, about which he had begun to talk.

All the same, one hears every day of people leaving Dublin. A year ago it was hard to get a house or lodging here; now, it has hard to let one. In the places of tourist resort there is an absolute slump. One friend of mine back from fishing in Donegal aid that apparently nobody would be there this summer. The tram ran no further than Letterkenny; beyond, the road was a good deal broken by trenches cut or boulders rolled down (the latter is a special local practice). Still, If I had time, to Donegal I would go in June, July, or August, all the more because other people would be staying away. A July flood might make it into an angler’s paradise. But the hotel-keepers and the very pleasant country-folk who let lodgings are going to suffer. 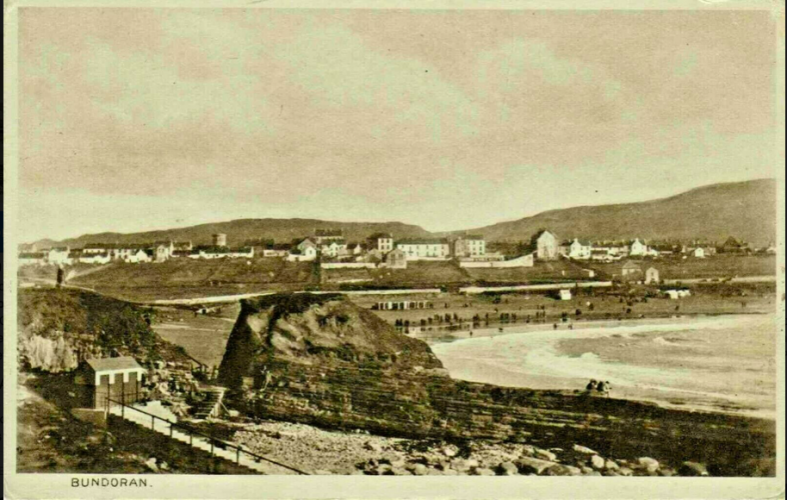 Here in Dublin the outsider suffers in more serious fashion. One bomb thrown at a lorry the other day killed a boy and wounded ten other innocent persons. It is safe to say that the attackers got off; when one prepares for bomb-throwing one arranges that there shall be a corner to dodge round. I believe that the I.R.A. are very jubilant over the smallness of their casualty list in Dublin, which, except for the captures at the Custom House, is almost negligible. This is probably one of the reasons for their confident view that the English are beaten if they only had the brains to know it. I doubt if this would be held with equal confidence in the country, where the I.R.A., if they attack, cannot do so with equal security. There is no cover like a big town, especially for ununiformed men.