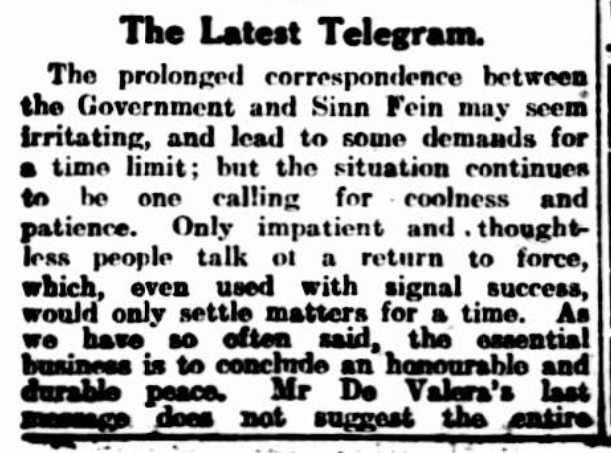 The negotiations between Éamon de Valera and David Lloyd George to set up a meeting continued until the end of September, much to the frustration of many observers who wished to see quick results. The Edinburgh Evening News was one such publication frustrated by the pace of negotiations, but one of many non-Irish publications hoping for ultimate peace.

The prolonged correspondence between the Government and Sinn Fein may seem irritating, and lead to some demands for a time limit; but the situation continues to be one calling for coolness and patience. Only impatient and thoughtless people talk of a return to force, which, even used with signal success, would only settle matters for a time. As we have so often said, the essential business is to conclude an honourable and durable peace. Mr De Valera’s last message does not suggest the entire abandonment of hope. Indeed, there are sentences in the last De Valera telegraph which seem to indicate a slow but appreciable growth of statesmanship in Ireland. A British Imperial settlement of the Irish problem is all-important. If the great difficulty between Great Britain and Ireland is removed, there is no other problem presented by the British Commonwealth which cannot be adjusted by the play of reason and good fellowship. If we fail with Ireland, the world may think our governing genius is on the decline.