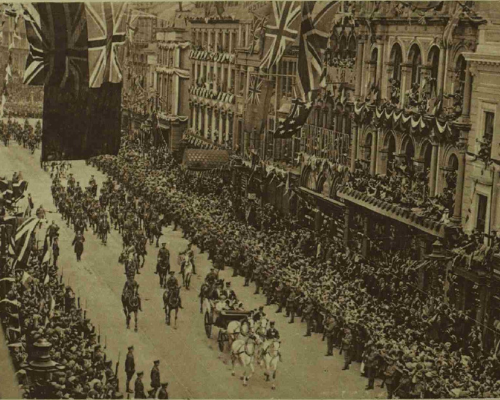 On 22 June 1921, the Northern Ireland parliament was formally opened at Belfast City Hall. The ceremony, attended by King George V and Queen Mary, attracted huge crowds across the city. Shortly afterwards, the Illustrated London News published a selection of images for its readers of the day's events.

'The Royal Opening of the First Ulster Parliament'

King George V and Queen Mary processing from Belfast City Hall to the Ulster Hall after the opening of parliament. Crowds greet the royal procession as it passes through Donegall Place. Jean Coates, wife of the Lord Mayor of Belfast, waits to give the queen a bouquet of flowers. George V gives his speech inside Belfast City Hall, calling for reconciliation across the island of Ireland.

There was also a reflection on the Adavoyle Train Ambush, which had escorted George V to Belfast for the state opening. On the return journey to Dublin on 24 June, the train was derailed by a mine planted by the IRA's Fourth Division. The derailment led to the deaths of three members of the machine gun troop, a railway guard and over 40 horses. The derailed train after the ambush, described as a 'diabolical outrage'.
Government of Ireland Act Centenary Historical Advisory Panel decade of centenaries