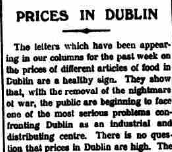 In August 1921, the Dublin Evening Telegraph printed an editorial reflecting on the high prices of food in the city. This editorial accompanied an article which investigated food prices, interviewed people in the food trade, made comparisons between Dublin and English cities, and then called for a full investigation of the issue.

The letters which have been appearing in our columns for the past week on the prices of different articles of food in Dublin are a healthy sign. They show that, with the removal of the nightmare of war, the public are beginning to face one of the most serious problems confronting Dublin as an industrial and distributing centre. There is no question that prices in Dublin are high. The only matter in dispute is whether they are so high that those who fix them and sell the commodities are making unreasonable profits. And that matter can only be cleared up by a thorough investigation of all the relevant facts. It does not seem to be disputed that prices in Dublin are higher than prices of similar commodities in London and other English centres. This one fact alone has serious import for every manufacturer and worker in Dublin, it means that their industries cannot compete successfully with English industries.

Can they be reduced?

It is a commonplace of economics that wages and the cost of living are inseparable questions which must be considered together. If the prices of food are high wages will be correspondingly high, and if the cost of living falls wages will fall with it. If prices and wages fall in England and remain stationary in Ireland it does not require much prophetic vision to foretell the fate of Irish industries that are competing in home and foreign markets with English industries. Food prices in England cannot, therefore, be ruled out as irrelevant to the discussion of food prices in Dublin. The matter concerns every trades union in Dublin and every firm of manufacturers. Both employers and employed have a direct interest in the adequate supply of food at reasonable prices. The farmers and other producers and the wholesale and retail distributors of food have their respective interests also, but, in the long run, it will be found that it will be for the good of all that prices of food should not be so high in Dublin as to prevent the industries of the city from holding their own against all outside competition. Present prices stand condemned by the comparisons that have been made. The question is, can they be reduced, and, if so, how?