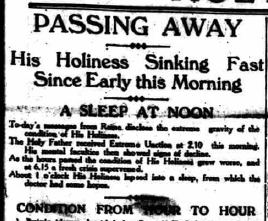 Pope Benedict XV, was head of the Catholic Church from 1914 until his death in 1922. His pontificate was largely overshadowed by World War I and its political, social, and humanitarian consequences in Europe. It is reported that Benedict XV celebrated Mass with the nuns at the Domus Sanctae Marthae in early January 1922 and while he waited for his driver out in the rain, he fell ill with a flu which turned into pneumonia. In the early hours of the 22 January, Cardinal Giorgi granted absolution to the dying pope, and his passing was announced shortly after 6am that morning. 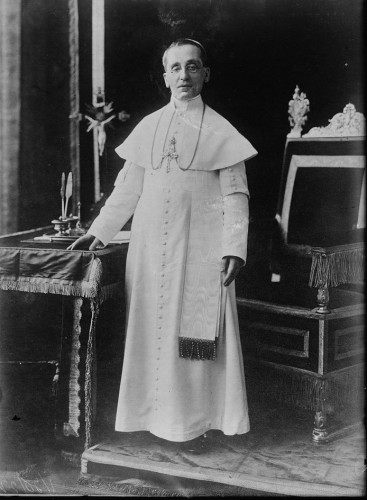 Pope Benedict XV during his reign. Courtesy of Wikicommons

His Holiness Sinking Fast Since Early this Morning

A SLEEP AT NOON

To-day's messages from Rome disclose the extreme gravity of the condition of His Holiness.

The Holy Father received Extreme Unction at 2.10 this morning. His mental faculties then showed signs of decline. As the hours passed the condition of His Holiness grew worse, and at 6.15 a fresh crisis supervened.

About 1 o'clock His Holiness lapsed into a sleep, from which the doctor had some hopes.