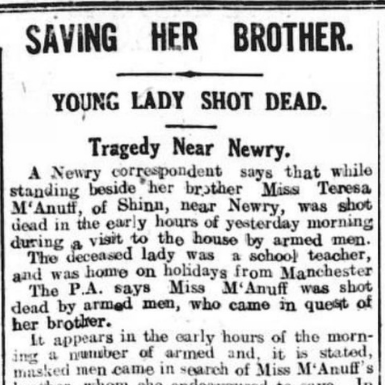 One of the grimmest aspects of the War of Independence was the use of reprisals to take revenge after ambushes. IRA members and British forces both engaged in reprisals – on 5 July 1921, news broke of a particularly violent death carried out by members of the Ulster Special Constabulary. Teresa McAnuff, headmistress of Bradford Corporation’s Nursing School in England, was on holiday at her home in Shinn, near Newry, when she was shot dead by a party of three constables under the command of William Campbell. The USC had raided McAnuff’s house believing that her brother, Patrick, had been involved in an ambush on two USC constable a few days previously. Patrick agreed to sign a form denouncing his involvement in the ambush – after he signed, Special Constable William Bell fired a shot in the house, killing Teresa. Bell later claimed that he had fired accidentally. Coming just a few days before a formal Truce was agreed between Lloyd George and de Valera, Teresa McAnuff’s death was a grim reminder of the violence that stalked ordinary people’s daily lives during the War of Independence.

A Newry correspondent says that while standing beside her brother Miss Teresa M’Anuff, of Shinn, near Newry, was shot dead in the early hours of yesterday morning during a visit to the house by armed men.

The deceased lady was a school teacher, and was home on holidays from Manchester. The P.A. says Miss M’Anuff was shot dead by armed men, who came in quest of her brother.

It appears in the early hours of the morning a number of armed and, it is stated, masked men came in search of Miss M’Anuff’s brother, whom she endeavoured to save. In the struggle firing took place, and the young lady was shot dead.

Deceased was a second cousin of Mr James M’Anuff, caretaker Newry Town Hall, and before going to England was a monitress in Canal Street Convent School.

The P.A. states that the deceased was head mistress of the Nurses’ Training School at Bradford, where she resided with her sister. The raiders called to ask her brother to sign a paper that he would not participate in any ambushes or murder. He did so, and the deceased also offered to sign. When she was told it was unnecessary, a shot then rang out, and she fell to the floor, shot through the heart and lungs.