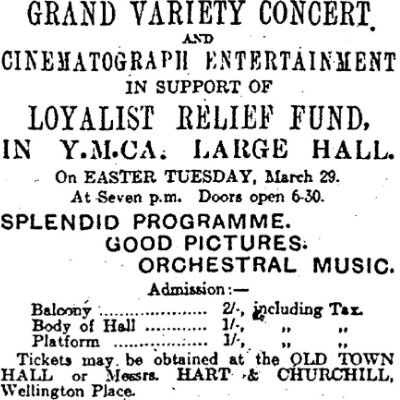 In March 1921 the Belfast News-Letter gave a review of a recent variety conference in the city’s Wellington Hall in aid of loyalists. Since July 1920 Belfast had witnessed repeated outbreaks of violence and disorder, particularly around the city's shipyards. The violence was targeted mostly at Catholics, but also affected Protestants, particularly trade unionists. This concert was given to support loyalists who had lost employment during the recent riots.

Variety Concert in the Wellington Hall

A most enjoyable variety concert and cinematograph entertainment in aid of the funds of the Belfast Loyalist Relief Fund was given last night in the Wellington Hall. The spacious auditorium was filled to overflowing in every part with an enthusiastic audience, several hundred people being unable to obtain admission. The concert was organized by Captain Leo M. Thomas and Councillor J.F. Gordon (hon. Secretary) assisted by an energetic committee consisting of Messrs. J. Cunningham, Frank Kelly, John Geddes (hon. treasurer), W.J. M’Dowell, Henry Fleming, William Henshaw, Robert Armstrong, Charles Brown, and David Beattie; while Mr. Dick Osborne gave valuable assistance in connection with the arrangements for the artistes. A special orchestra was in attendance and played a selection of choice music during the evening. It should be mentioned that the Relief Fund has been established to assist loyalists who were displaced from their homes and thrown out of their employment during the riots in the city.

The programme was of very great interest, most of the turns being of a professional nature, and encores were the rule, while the screen pictures of a varied kind, fun, frolic, and love being predominating features. The Dixie Kids in song and dance were enthusiastically received and a charming comedienne with a lovely contralto voice, Miss Norah Miles, got an ovation for her straight singing as well as for her humorous items. Delphi and Parker, vocal and dancing entertainers, caught the popular fancy and were loudly recalled, and Harry Walters, vocal comedian and dancer, was also eminently successful. Miss Ine Kelso, a sweet-toned mezzo-soprano sang with artistic expression ‘The little road Home’, and in answer to an imperative encore she sang with equal acceptance ‘My Prayer’. Mr Hugh Baird, a popular baritone with a rich powerful voice sang very expressively ‘The City of Laughter and Tears’ and ‘Let the rest of the world go by’ having repeatedly recalled.

A quartette of dancers in costume delighted the audience both in dance and song the entertainment concluding with the singing of the National Anthem. The promoters are to be congratulated on the success of the entertainment, and the Relief Fund should be handsomely augmented by the proceeds.