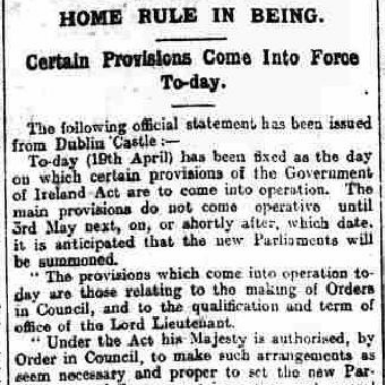 The Government of Ireland Act of 1920 partitioned Ireland, creating two new Home Rule states of ‘Northern’ and ‘Southern’ Ireland. The act officially came into force on 3 May 1921, however, certain provisions of the act came into force in April, to pave the way for the full formal enactment of partition. The statement announcing these provisions, issued by the British administration at Dublin Castle, was reprinted in full in the Belfast News-Letter.

Home Rule in Being: Certain Provisions Come into Force Today

The following official statement has been issued from Dublin Castle:

Today (19th April) has been fixed as the day on which certain provisions of the Government of Ireland Act are to come into operation. The main provisions do not come operative until 3rd May next, on, or shortly after, which date, it is anticipated that the new Parliaments will be summoned.

The provisions which come into operations today are those relating to the making of Orders in Council, and to the qualifications and term of office of the Lord Lieutenant.

Under the Act his Majesty is authorised, by Order in Council, to make such arrangements as seem necessary and proper to set the new Parliaments and Government in motion, and several arrangements and adjustments have to be made in anticipation of the first elections and the first meetings of the Parliaments. This will be done by means of Orders in Council which will be made and published at the earliest possible opportunity.

The second provision under the Act which comes into operation today is that which removes any existing religious disqualifications for the office of Lord Lieutenant, and secures that the office is in future to be a non-political office, held for a definite period of six years, and not affected by any change of Ministry.

The formal appointment of Lord Edmund Talbot, as first Lord Lieutenant, under the new system, can now be effected in due course.