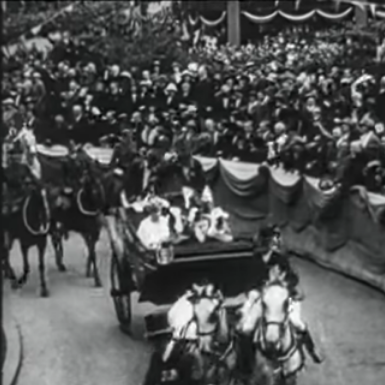 Footage of the procession leading up to Belfast City Hall. © British Pathé.

On the morning of 22 June 1921 King George V and Queen Mary arrived in Belfast for the formal opening of the Northern Ireland parliament. While the visit offered Unionists a chance to show the strength of their British connections, many Nationalists felt it showed a basic disregard for the recent suffering of the city’s Catholic population. The Belfast Corporation prepared for the event by decorating the City Hall and surrounding buildings, building stands to accommodate spectators, and placing restrictions on the sale of alcohol. There was also a substantial security presence, with over a thousand police and troops stationed along the procession route. Following the opening of parliament, the royals then visited the Ulster Hall before leaving Belfast on the same day. Several British newsreel companies, such as Pathé and Gaumont, sent camera crews to Belfast to film the royal visit. This footage, shown in cinemas across Britain and Ireland, can be viewed below.

Footage of the procession leading up to Belfast City Hall. © British Pathé.