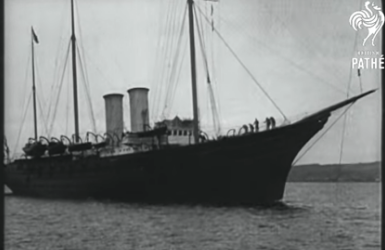 The royal yacht sailing to Belfast for the formal opening of the Northern Ireland parliament. © British Pathé.

On the eve of George V and Queen Mary's visit to Belfast for the state opening of the Northern Ireland parliament, the Westminster Gazette reported crowds as the royals began their journey at London’s Euston railway station. The royal train then departed for Holyhead, where the king and queen later boarded the royal yacht, the Victoria and Albert, escorted by two battleships, two cruisers and nine destroyers. The report then detailed preparations in Belfast in advance of their arrival.

The departure of the King and Queen from London attracted a crowd of people to Euston, who gave a special warmth to their cheers, and then remained standing in the yard watching the Royal carriages until the coachmen whipped up their horses for the return to Buckingham Palace.

The number of people who actually saw the Royal train leave the station was small, for the railway police allowed entrance to none but those armed with permits. It was from a little group which was penned behind a barrier at the side of the platform a voice cried, “Safe home again, your Majesty!” and led the singing of the National Anthem and the cheering which followed …

The Belfast streets on the route which will be traversed by the King to-morrow were closed to the public during this morning, and closely lined with troops, who carried out a full rehearsal of to-morrow’s ceremony.

Loyalists are now busily decorating, and the city is rapidly becoming a dream of colour. The work is being carried out very thoroughly and on a most lavish scale.

The Royal procession will, in all, drive through about two miles of streets, and the return after the opening will be at a walking pace.

Unparalleled precautions will be taken by the military and police. Under a military order all means of gaining access to the roofs of houses on the route must be blockaded from eight to-night until Thursday morning. No person will be allowed on any roof to-morrow, except with a special permit.

The police are establishing the identity of all occupants of stands, and arrivals are being carefully watched …

The royal yacht sailing to Belfast for the formal opening of the Northern Ireland parliament. © British Pathé.