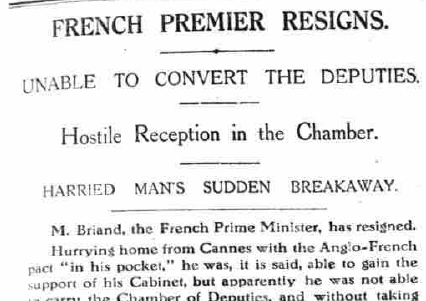 Aristide Pierre Henri Briand was a French statesman who served eleven terms as Prime Minister of France during the French Third Republic. He is mainly remembered for his focus on international issues and reconciliation politics during the interwar period. On the 15 January, 1922, his seventh government collapsed as Franco-German relations strained in the face of reparation agreements. Briand would return to a role within the French government in 1925 and remain in power as Foreign Minister until his death in 1932.

UNABLE TO CONVERT THE DEPUTIES

HOSTILE RECEPTION IN THE CHAMBER

M. Briand, the French Prime Minister, has resigned. Hurrying home from Cannes with the Anglo-French pact "in his pocket", he was, it is said, able to gain the support of his Cabinet, but apparently he was not able to carry the Chamber of Deputies, and without taking a vote he announced his resignation.

It may have been an astute Parliamentary move or the sudden impulse of a harried and wounded man who could bear no more. It was utterly unexpected, and at Canness the news is said to have come as a thunderclap.

M. Poincare, ex-Present of the Republic, has been invited to form a cabinet.