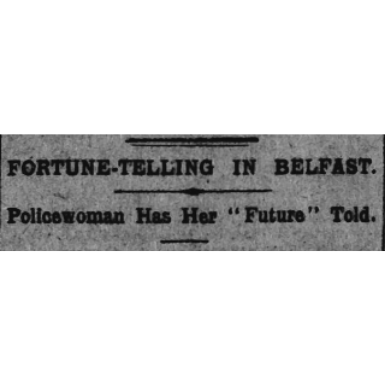 Fortune telling is brought to court as woman is fined for telling 'future' of Belfast policewoman.

POLICEWOMAN HAS HER "FUTURE" TOLD

A case of fortune telling came before the Belfast magistrates yesterday, the defendant being Catherine Thompson alias' M'Mullan, who was represented by Mr. B Campbell.

Sergeant Kennedy stated that owing to complaints he had received he arranged with Policewoman J. Bell for her to call at defendant's house at 53 William street. Subsequent to this Witness also paid a visit, and found the defendant working with a pack of cards. A young woman was sitting at the table with her. She at first stated they were having a game of cards, but she afterwards said: "I may as well tell the truth. I was trying to earn a little money. There are a house-full to keep here, and no one working. It's the first time you caught me, and it will be the last." The young woman present admitted she was there to get her fortune told.

Policewoman Bell gave evidence of having visited the defendant's house in the company of a friend. The defendant told her to sit at the table and proceeded to cut the cards "She told me," said the witness, "that I had a great disappointment. She also said she saw a sick bed, and that I would shed tears of sorrow over someone going into hospital- a man, she thought. She said there would be a change for me after a death, and I would get an offer of marriage within a month or two. And that I would cross water. There was a fair woman and a dark woman who would try to injure me, and there was a dark man who followed me up, but was very jealous."

Mr Campbell, on behalf of the defendant, gave an undertaking that she would not repeat the offence and the magistrates put her under a rule of bail in £5.