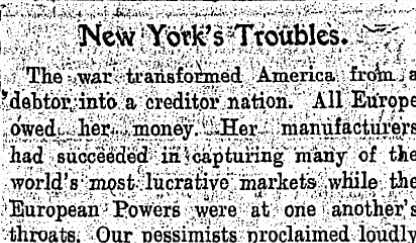 The Great Depression – the most significant economic event of the century – was still almost a decade away in 1921, but already some perceptive observers could see the problems of international dependence on American finance. In an editorial on 24 September 1921, the unionist Irish Times was reporting on an economic slowdown in New York and highlighting how “All Europe owed her money”.

The war transformed America from a debtor into a creditor nation. All Europe owed her money. Her manufacturers had succeeded in capturing many of the world’s most lucrative markets while the European Powers were at one another’s throats. Our pessimists proclaimed loudly that the hub of the universe had been shifted from London to New York. Now, however, thoughtful men and women in the United States are passing through a period of grave anxiety. The proud supremacy ofthe dollar on the money market has proved to be anything but an unmixed blessing. Other nations are unable to buy the goods that America has to offer, and the industrial “boom” has come to a sudden stop. Consequently, large numbers of men and women have been thrown out of work, and as American Labour is still in the infancy of its development, distress is widespread, and the efforts to cope with it so far have been hopelessly inadequate. For every one man who is out of work in Great Britain three are in the same plight in the United States.